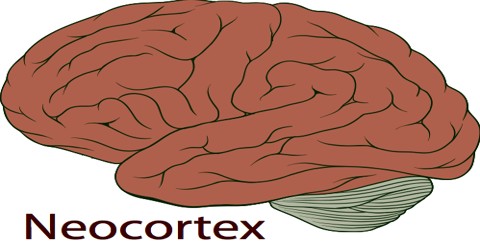 Neocortex is the largest and evolutionarily most recent portion of the cerebral cortex, composed of complex, layered tissue, the site of most of the higher brain functions. Neocortex is Latin for “new bark” or “new rind”. Neopallium means “new mantle” and isocortex means “equal rind”. It is a thin layered structure surrounding mammalian brains.  It is the hallmark of mammalian brains and not present in birds or in reptiles.  It is also the most divergent part across mammalian species. It is called “neo”, because it is evolutionarily the newest part of the cerebreral cortex. Neocortex contains some 100 billion cells, each with 1,000 to 10,000 synapses (connections), and has roughly 100 million meters of wiring, all packed into a structure the size and thickness of a formal dinner napkin. The cells in the neocortex are arranged in six layers, within which different regions permit vision, hearing, touch, and the sense of balance, movement, emotional responses and every other feat of cognition. Structure and Functions of Neocortex

Neocortex is the most developed in its organisation and number of layers, of the cerebral tissues. It is the top layer of the cerebral hemispheres, 2-4 mm thick, and made up of six layers, labelled I to VI, with VI being the innermost and I being the outermost. It consists of the grey matter, or neuronal cell bodies and unmyelinated fibers, surrounding the deeper white matter (myelinated axons) in the cerebrum. While the neocortex is smooth in rats and some other small mammals, it has deep grooves (sulci) and wrinkles (gyri) in primates and several other mammals. The neocortex contains both excitatory (~80%) and inhibitory (~20%) neurons, named for their effect on other neurons. The structure of the neocortex is relatively uniform, consisting of six horizontal layers segregated principally by cell type and neuronal connections. The function of the nervous system depends on connectivity.  For example, the visual area can perform visual function because it receives visual information from the visual organ, the eye. Similary, the auditory area receives auditory information and the somatosensory area receives body sensations.  It has also been shown to play an influential role in sleep, memory and learning processes. Semantic memories appear to be stored in the neocortex, specifically the anterolateral temporal lobe of the neocortex. It is also involved in instrumental conditioning; responsible for transmitting sensory information and information about plans for movement to the basal ganglia.