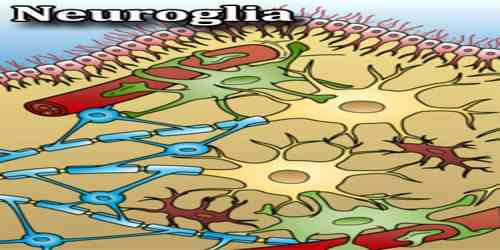 Neuroglia is the delicate connective tissue which supports and binds together the nervous elements of the central nervous system. One part of it, which lines the central canal of the cord and ventricles of the brain, is formed from columnar cells, and is called ependyma, while the rest consists of small cells with numerous processes which sometimes branch and sometimes do not. Neuroglia is cells in our nervous system that are not neurons. Their role is to be the support team and cheerleaders for the neurons. The neuroglia: Classifications and Functions of Neuroglia Microglia- Microglia are so-called because they are smaller in size. The cells present finer tortuous processes. Microglia are identified by following three characters which are related to the letter ‘M’. Microglia are Mesodermal in origin which develops from circulating Monocytes of fetal blood. Its function as Macrophages of central nervous system to engulf toxic substances, microorganism and damaged CNS tissue debris.

For phagocytic function, microglia are Migratory in nature. Many microglia, acting as scavenger cells are localized at the site of damaged or degenerated nerve tissue and may fuse together to form a Multinucleated giant cell of central nervous system.

Astrocytes – Star-shaped glial cells in the CNS are collectively known as astrocytes. ‘Astro’ implies ‘star’ and ‘cyte’ refers to ‘cell’. These glial cells are responsible for a lot of important things in the central nervous system; most notably, they are part of the blood-brain barrier.

Ependymal Cell – These are single-layered cubical or columnar cells lining the cavities of central nervous system (brain and spinal cord). They represent the original cells lining the neural tube of embryonic life. The free surface of the cells presents ultramicroscopic finger-like prolongations which are nonmotile in nature. These are known as stereocilia.

Other – Pituicytes from the posterior pituitary are glia cells with characteristics in common to astrocytes. Tanycytes in the median eminence of the hypothalamus are a type of ependymal cell that descend from radial glia and line the base of the third ventricle.