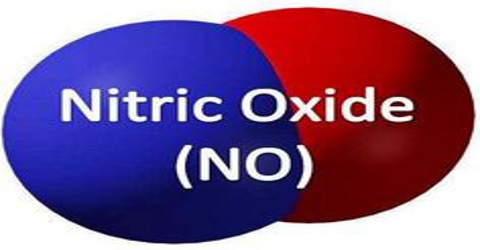 Nitric oxide is a colorless, poisonous gas produced as an intermediate compound during the manufacture of nitric acid from ammonia or from atmospheric nitrogen. It is also produced through cellular metabolism. In the body, nitric oxide is involved in oxygen transport to the tissues, the transmission of nerve impulses, and other physiological activities. It is also known as nitrogen monoxide, is a naturally-occurring gas in the body. It is a particularly important intermediate in the chemical industry. In addition, nitric oxide is formed in nitrogen-oxygen mixtures at high-temperature conditions, such as those found in combustion systems including internal combustion piston engines, gas turbines, industrial furnaces, and boilers. It is also produced naturally by the extremely high air temperatures produced along the path of lightning in thunderstorms.

It plays a number of important roles in the body, including the following:

The 1998 Nobel Prize in Medicine or Physiology was awarded to Robert F. Furchgott, Ferid Murad, and Louis J. Ignarro for their discoveries of the role of nitric oxide in cardiovascular physiology.

Production and Functions of Nitric Oxide

Nitric oxide (NO) is the first gas discovered to act as a signaling molecule, a transmitter of important signals to cells in various systems of the human body. It is now known that the cells of a blood vessel’s inner walls use NO to signal the vessel to relax and dilate, increasing blood flow. Nitroglycerin, whose effectiveness in treating heart problems was once a mystery, is now known to work by releasing NO. NO has a variety of other important biological functions, including destroying bacteria within the immune system and acting as a neurotransmitter. From a thermodynamic perspective, ·NO is unstable with respect to O2 and N2, although this conversion is very slow at ambient temperatures in the absence of a catalyst. Because the heat of formation of ·NO is endothermic, its synthesis from molecular nitrogen and oxygen requires elevated temperatures above 1000 °C.

Nitric oxide is a molecule that our body produces to help its 50 trillion cells communicate with each other by transmitting signals throughout the entire body. It has been shown to be important in the following cellular activities: Besides the sources we mentioned earlier, there is the man-made alternative: supplements. These are not pure nitric oxide, but they contain arginine alpha-ketoglutarate, which is also known as AAKG and arginine, which helps our body improve nitric oxide production.