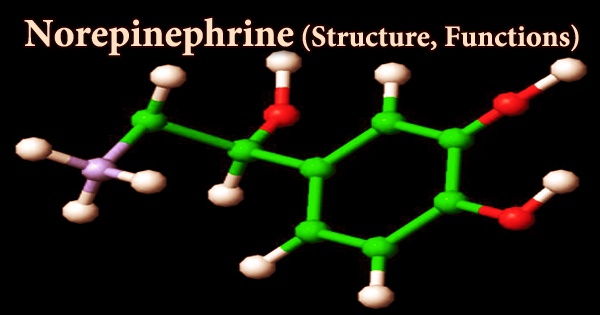 Norepinephrine (NE), also known as noradrenaline (NA) or noradrenalin, is a catecholamine hormone found in the sympathetic nervous system that acts as a neurotransmitter. It is a chemical that is released mostly from the terminals of sympathetic nerve fibers and acts to raise skeletal muscle contraction force as well as the rate and force of heart contraction. The medicine is also known as “norepinephrine” on an international level. Parts of the body that generate or are impacted by noradrenergic substances are referred to as noradrenergic, regardless of the name given to the substance.

The nucleus locus ceruleus of the pons and neurons of the reticular formation house the majority of central noradrenergic neurons. A significant number of cortical, subcortical, and spinomedullary areas are innervated by fibers from these nuclei. The central noradrenergic neurons are thought to play a role in emotional disorders, learning and memory, and sleep–wake cycle regulation, among other things. The effects of norepinephrine in the body are numerous, the most notable of which are those connected with the ‘fight or flight’ reaction to perceived danger.

Norepinephrine’s main role is to prepare the brain and body for action. The actions of norepinephrine and epinephrine (commonly known as adrenaline), a similar catecholamine, are mediated through the adrenergic receptor family. Norepinephrine raises arousal and alertness, promotes vigilance, improves memory formation and retrieval, and concentrates attention in the brain; nevertheless, it also raises restlessness and anxiety. Norepinephrine increases heart rate and blood pressure in the rest of the body, causes glucose to be released from energy storage, increases blood flow to skeletal muscle, decreases blood flow to the gastrointestinal system, and inhibits bladder voiding and gastrointestinal motility.

Norepinephrine affects adrenergic receptors directly; stimulation of alpha-adrenergic receptors produces vasoconstriction of the iris’s radial smooth muscle, arteries, arterioles, veins, urine bladder, and gastrointestinal sphincter. Noradrenaline is created in little nuclei in the brain that have a big impact on other parts of the brain. The locus coeruleus, located in the pons, is the most significant of these nuclei. The catechol group (a benzene ring with two hydroxyl groups) is attached to an amine (nitrogen-containing) group in norepinephrine, making it a catecholamine.

Outside of the brain, norepinephrine is employed as a neurotransmitter by sympathetic ganglia in the spinal cord or in the abdomen, Merkel cells in the skin, and the adrenal glands, which release it directly into the bloodstream. Myocardial contractility, heart rate, automaticity, and atrioventricular (AV) conduction all rise when beta-1 adrenergic receptors are stimulated, whereas bronchiolar and vascular smooth muscle dilation occurs when beta-2 adrenergic receptors are stimulated. Norepinephrine operates on target cells by attaching to and activating adrenergic receptors on the cell surface, regardless of how or where it is produced.

The catecholamine noradrenaline is made from l-tyrosine, an aromatic amino acid found in bodily fluids and absorbed by noradrenaline-producing cells. Nerve endings produce the majority of norepinephrine in the blood, which is produced mostly by the adrenal glands. It affects our emotions as well as our capacity to concentrate. Norepinephrine, along with other hormones, aids the body’s response to stress and exercise. Other hormones include:

Norepinephrine, commonly known as noradrenaline, has similar actions as epinephrine, including:

Blood arteries narrow as a result of norepinephrine, which raises blood pressure. In phenyl ethanolamine N-methyltransferase-containing cells, l-tyrosine is transformed to noradrenaline and then to its methylated form, adrenaline, through a series of intermediary stages. A sequence of enzymatic processes in the adrenal medulla and postganglionic neurons of the sympathetic nervous system produce norepinephrine from the amino acid tyrosine.

Most postganglionic sympathetic fibers and the diffuse projection system in the brain that emerges from the LOCUS CERULEUS use norepinephrine as their primary transmitter. It’s also found in plants and is utilized as a sympathomimetic in medicine. The neurotransmitters norepinephrine and serotonin work well together. These compounds have medicinal value as well as antidepressant effects. Serotonin, widely known as the “feel-good” hormone, boosts mood, while norepinephrine boosts alertness and energy levels.

Norepinephrine, like many other physiologically active chemicals, works by attaching to and activating receptors on the surface of cells. The alpha and beta adrenergic receptors are two types of norepinephrine receptors that have been found. It is primarily used to treat patients in vasodilatory shock states such as septic shock and neurogenic shock, and it has demonstrated to be more effective than dopamine in terms of survival. For patients with critical hypotension, it’s also utilized as a vasopressor.

Norepinephrine can also be broken down into inert compounds. When one of these processes is inhibited, the synaptic level of norepinephrine rises, and the effects of norepinephrine last longer. The sympathetic nervous system, which consists of around two dozen sympathetic chain ganglia positioned adjacent to the spinal cord, as well as a set of prevertebral ganglia located in the chest and abdomen, uses norepinephrine as its primary neurotransmitter. Although norepinephrine can be used to treat hypotension caused by spinal anesthesia, other vasopressors with a longer duration of effect and the ability to be injected intramuscularly (IM) are more typically employed, such as metaraminol, methoxamine, or phenylephrine.