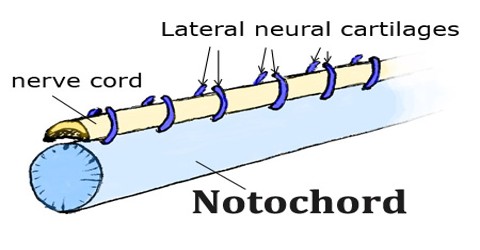 Notochord is a primitive beginning to the backbone. The word notochord comes from the Greek words notos (back) and chorde (cord). It appears in embryos as a small flexible rod made from cells from the mesoderm, which is one of the three layers of cells of embryos. Notochords are only found in the phylum chordata, a group of animals that includes humans. In vertebrates, the notochord develops into a true backbone in the embryonic phase. Primitive chordates, such as lancelets and tunicates, retain a notochord throughout their lives. The notochord lies along the anteroposterior (“head to tail”) axis, is usually closer to the dorsal than the ventral surface of the animal, and is composed of cells derived from the mesoderm. It has been observed to have many functions including developmental functions. The most commonly cited functions are as a site of muscle attachment, vertebral precursor, and as a midline tissue that provides signals to the surrounding tissue during development.

Structure and Functions of Notochord Notochords provide a rigid, yet flexible structure that enables muscle attachment, which is believed to be advantageous both for individual development and evolution. It is made from a material that is similar to cartilage, the tissue you find at the tip of your nose and a shark’s cartilaginous skeleton. The notochord derives during gastrulation, infolding of the blastula, or early embryo from cells that migrate anteriorly in the midline between the hypoblast and the epiblast (inner and outer layers of the blastula). These cells coalesce immediately beneath the developing central nervous system. With the formation of the vertebral column, the notochord is incorporated into the column as the centres of the intervertebral discs, called the nuclei pulposi, which cushion the vertebrae.

Notochord is the defining feature of Chordates, and was present throughout life in many of the earliest chordates. Although the stomochord of hemichordates was once thought to be homologous, it is now viewed as a convergence. All chordates start out as one cell, a zygote. It divides into multiple cells in a single layer called a blastula. Then in a process called gastriculation, the blastula develops into 3 embryonic layers, which are collectively called the embryonic germ layers. These are the ectoderm, or outer layer, the mesoderm, or the middle layer, and the endoderm, or inner layer.