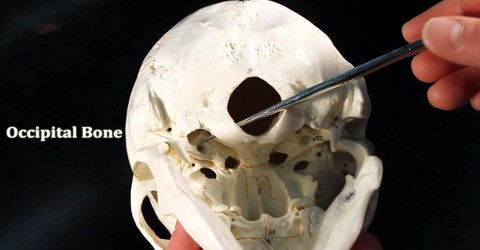 There are 206 separate bones in the human body. Collectively they form the skeletal system; a structure bound together by ligaments at the joints and set in motion by the muscles, which are secured to the bones by means of tendons. Bones, ligaments, muscles, and tendons are the tissues of the body responsible for supporting and moving the body.

Structure and Functions of Occipital Bone

The occipital is cupped like a saucer in order to house the back part of the brain. It is one of seven bones that fuse together to form the skull and is directly next to five of the cranium bones. The foramen magnum houses the accessory nerves, which provide nerves to the neck and shoulder, the alar ligaments, which also help stabilize the head and neck, and the membrana tectoria a ligament that connects the spine to the occipital bone. This curved bone contains the foramen magnum, a large oval hole that allows the medulla oblongata to travel from the brain and connect to the vertebral canal. The medulla oblongata also contains the posterior spinal arteries and vertebral arteries, which supply blood to the brain. The occipital plane of the squamous part of the occipital bone is developed in membrane, and may remain separate throughout life when it constitutes the interparietal bone; the rest of the bone is developed in cartilage. It is said to be ossified from two centers and the basilar portion from one. As a person ages the occipital bone fuses with other bones of the cranium.