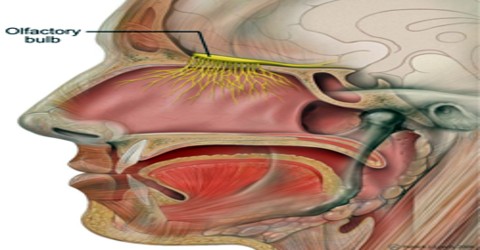 Olfactory bulb is the anterior and slightly enlarged end of the olfactory tract, from which the cranial nerves concerned with the sense of smell originate. It is a key part of the olfactory apparatus consisting of a bulbous enlargement of the end of the olfactory nerve on the under surface of the frontal lobe of each cerebral hemisphere just above the nasal cavity and also called Morgagni’s tubercle. Olfactory bulb comprise of granule cell which are a type of interneuron. These granule cells are devoid of axons and hence can create inhibition at local level. This is accomplished by granule cells by giving out GABA from the dedicated spines of dendritic which are in contact with secondary and horizontally long dendrites related to mitral men do not have access to view this node.

Structure and Function of Olfactory Bulb

The Olfactory bulb performs the important task of controlling the nerves related to odor in the brain system. It is the most rostral (forward) part of the brain, as seen in rats. In humans, however, the olfactory bulb is on the inferior (bottom) side of the brain. The axons of olfactory receptor (smell receptor) cells extend directly into the highly organized olfactory bulb, where information about odours is processed. Within the olfactory bulb are discrete spheres of nerve tissue called glomeruli. They are formed from the branching ends of axons of receptor cells and from the outer (dendritic) branches of interneurons, known in vertebrates as mitral cells, that pass information to other parts of the brain. Tufted cells, which are similar to but smaller than mitral cells, and periglomerular cells, another type of interneuron cell, also contribute to the formation of glomeruli.

The main olfactory bulb has a multi-layered cellular architecture. In order from surface to the center the layers are:

The nervous system is divided into the Central and Peripheral nervous system. It helps us identify various senses in the surroundings like smell, vision, touch, taste and sound. Due to the realization of all these senses we are able to enjoy the beauty of various natural creations and enrich our lives. Different parts in the brain are divided for identifying the various senses. Although these organs or their receiving ends are placed at different places, the main place of activity and response is the brain. Its potential functions can be placed into four non-exclusive categories:

The olfactory bulb is, along with both the subventricular zone and the subgranular zone of the dentate gyrus of the hippocampus, one of only three structures in the brain observed to undergo continuing neurogenesis in adult mammals. In most mammals, new neurons are born from neural stem cells in the sub-ventricular zone and migrate rostrally towards the main and accessory olfactory bulbs.