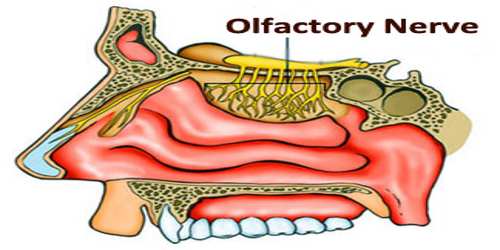 The sense of smell can be altered due to a variety of conditions referred to as hyperosmia, hypoosmia, anosmia, and dysosmia. However, the most common pathology to affect the olfactory nerve is the common cold. Caudally, the olfactory nerve roots are located superior to the origin of the optic nerve and the anterior cerebral artery.

Structure and Functions of Olfactory Nerve

The Olfactory Nerve is the first of the Twelve Cranial Nerves. It consists of both afferent and efferent sensory fibers. The word Afferent means toward the centre, as in from a peripheral area of a limb to the central nervous system. The word Efferent is the opposite of Afferent, meaning away from the centre and toward the periphery which is when the stimulus is carried back to the brain from a peripheral area.

The olfactory nerves consist of a collection of many sensory nerve fibers that extend from the olfactory epithelium to the olfactory bulb, passing through the many openings of the cribriform plate, a sieve-like structure of the ethmoid bone. The nerve’s olfactory receptors are located within the mucosa of the nasal cavity. Unlike many other nerves, CN1 does not possess two trunks. Rather, its sensory fibers extend through the ethmoid bone’s cribriform plate, a part of the skull located behind the nose. Once airborne chemicals and particles enter the nasal cavity, they interact with these neural receptors. The Primary Efferent Nerve Fibre stems from the Anterior Commissure of the Corpus Callosum. It passes through the Olfactory Tract. It synapses in the Contralateral Olfactory Bulb on an Inner Nuclear cell. These cells are excited by Mitral cells and inhibited by Tuft cells, upon which the Inner Nuclear cell’s fibers attach.

They surpass the Submucosa and terminate on the Olfactory Mucosa (Stratified Squamous Non-keratinizing Epithelium) as Olfactory Cells, in the roof of the Nasal Cavity.

CN1 is the shortest cranial nerve within the human head. It can be susceptible to lesions created by blunt trauma damage, which can result from complications of frontal brain lobe tumors, meningitis, and a few other factors. This will lead to a reduced or absent sense of smell. However, even if CN1 is damaged, nasal pain will still be transmitted via the trigeminal nerve. The functional components of the olfactory nerve include SVA, special visceral afferent, which carries the modality of smell.