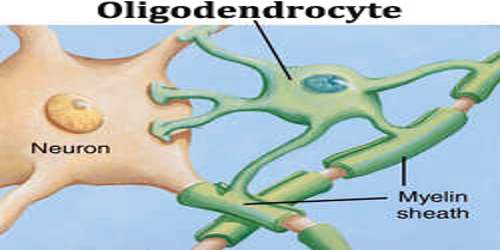 Oligodendrocyte is any of the neuroglial cells of the central nervous system that are responsible for the formation of myelin sheaths in the white matter and that, in the gray matter, is detectable using myelin staining techniques and may provide support for adjacent neurons. The oligodendrocytes surround and insulate the long fibers (axons) through which the nerves send electrical messages. Structure and Functions of Oligodendrocyte

Oligodendrocytes have small amounts of cytoplasm surrounding rounded nuclei, and possess only a few short processes. There are two main types: Oligodendrocytes are found only in the central nervous system, which comprises the brain and spinal cord. These cells were originally thought to have been produced in the ventral neural tube; however, research now shows oligodendrocytes originate from the ventral ventricular zone of the embryonic spinal cord and possibly have some concentrations in the forebrain. They are the last cell type to be generated in the CNS.