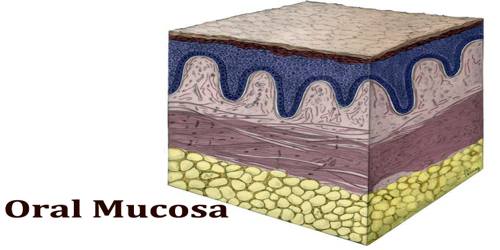 Oral mucosa is a specialized type of tissue that lines the mouth. It is composed of highly-regenerative stratified epithelium and submucosal connective tissue, which demonstrate accelerated epithelial turnover and scarless wound healing when compared with epidermis. This tissue is designed to provide protection for the body from infection and debris, and it is capable of producing secretions such as mucus, in addition to absorbing materials introduced into the mouth. The trait of absorption is used to apply certain types of medications, such as oral vaccines. The oral cavity has sometimes been described as a mirror that reflects the health of the individual. Changes indicative of disease are seen as alterations in the oral mucosa lining the mouth, which can reveal systemic conditions, such as diabetes or vitamin deficiency, or the local effects of chronic tobacco or alcohol use.

Three different types of oral mucosa can be found in the mouth. Around the tongue, cheeks, and hard palate, the tissue is keratinized so that it can withstand the abrasiveness of chewing. Other areas have non-keratinized tissue, which is more fragile and requires moist secretions to stay healthy. The taste buds are made from a third type of highly specialized tissue. Similar types of mucus membranes can be found in other regions of the body, such as the eyes and genitals. The color of the oral mucosa can vary, depending on the skin color of the body. In some people, it is a pale pink, while others have darker pink to brown tissue. Extremely pale mucosa can be a sign that someone is anemic, while patchy or dark ones can be signs of a medical problem. A classic problem that develops with the oral mucosa is leukoplakia, in which white plaques of material appear in the mouth.

Structure and Functions of Oral Mucosa Keratinization is the differentiation of keratinocytes in the stratum granulosum into nonvital surface cells or squames to form the stratum corneum. The cells terminally differentiate as they migrate to the surface from the stratum basale where the progenitor cells are located to the superficial surface. Histologically, an excess amount of keratin is noted on the surface of the tissue, and the tissue has all the layers of an orthokeratinized tissue with its granular and keratin layers. In patients who have habits such as clenching or grinding (bruxism) their teeth, a larger area of the buccal mucosa than just the linea alba becomes hyperkeratinized. This larger white, rough, raised lesion needs to be recorded so that changes may be made in the dental treatment plan regarding the patient’s parafunctional habits.

Oral mucosa has several functions. Its main purpose is to act as a barrier. It protects the deeper tissues such as fat, muscle, nerve and blood supplies from mechanical insults, such as trauma during chewing, and also prevents the entry of bacteria and some toxic substances into the body.

There is a degree of permeability that allows for rapid absorption into the body in certain circumstances e.g. the permeability of the oral mucosa is utilised in the rubbing of orange juice or another sugary drink when diabetics suffer from a low-blood sugar.