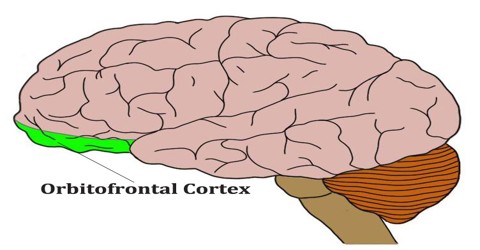 Orbitofrontal Cortex (OFC) is a structure in which multiple sensory information and reward information converge. It is a prefrontal cortex region in the frontal lobes in the brain which is involved in the cognitive processing of decision-making. In non-human primates it consists of the association cortex areas Brodmann area 11, 12 and 13; in humans it consists of Brodmann area 10, 11 and 47. It also receives visual, somatosensory, and auditory inputs through the uncinate fascicles and/or through the subcortical structures. The OFC is also densely connected with limbic/paralimbic structures. It is defined as the part of the prefrontal cortex that receives projections from the magnocellular, medial nucleus of the mediodorsal thalamus, and is thought to represent emotion and reward in decision making. It gets its name from its position immediately above the orbits in which the eyes are located.

Orbitofrontal Cortex (OFC) has been divided by structure and connections into a medial and a lateral part. The medial part is most strongly connected with the hippocampus and associated areas of the cingulate, retrosplenial and entorhinal cortices, anterior thalamus and septal diagonal band. The lateral part can be further subdivided into three sectors.

It also contains the secondary and tertiary olfactory cortical areas, in which information about the identity and also about the reward value of odours is represented. The orbitofrontal cortex also receives information about the sight of objects from the temporal lobe cortical visual areas, and neurons in it learn and reverse the visual stimulus to which they respond when the association of the visual stimulus with a primary reinforcing stimulus is reversed. The human OFC is among the least-understood regions of the human brain; but it has been proposed that the OFC is involved in sensory integration, in representing the affective value of reinforcers, and in decision-making and expectation.