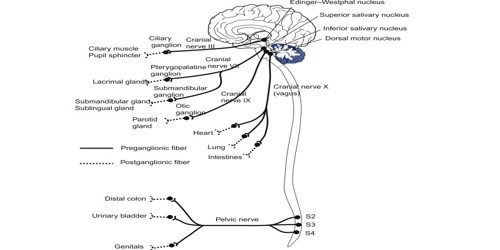 The parasympathetic nervous system has many different effects. It affects every part of the body, including: 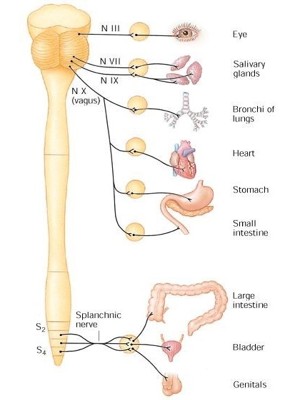 However, in a healthy person, the brain realizes when the parasympathetic nervous system’s effects are getting too strong. For example, the brain may realize that the person is breathing too slowly, or that their heart rate is too low.

The parasympathetic nervous system is controlled mostly by the vagus nerve. This is an important nerve that comes from the brain and goes all the way down to the bottom of the spinal cord. The vagus nerve sends out chemical messengers called neurotransmitters – mostly one called acetylcholine. This chemical causes changes in many different parts of the body. It is active all the time and promotes life by regulating the vital body functions, although the person is unconscious about all these processes.