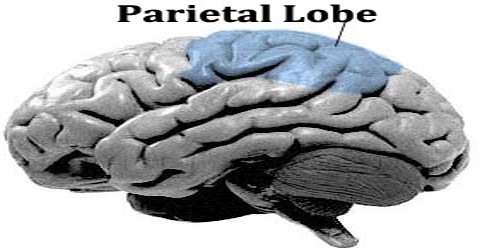 Parietal lobe is the upper middle lobe of each cerebral hemisphere, located above the temporal lobe. It is a part of the brain, specifically the section of the cerebral hemisphere that lies beneath the parietal bone, the main side bone of the skull. Complex sensory information from the body is processed in the parietal lobe, which also controls the ability to understand language. The lobe is named for the parietal bone that sits directly over the region as part of the skull. The parietal lobe is known to interpret sensory information, such as letting we know the location of parts of our body and aiding in physical navigation.

The parietal lobe integrates sensory information among various modalities, including spacial sense and navigation (proprioception), the main sensory receptive area for the sense of touch (mechanoreception) in the somatosensory cortex which is just posterior to the central sulcus in the postcentral gyrus, and the dorsal stream of the visual system.

It is vital for sensory perception and integration, including the management of taste, hearing, sight, touch, and smell. It is home to the brain’s primary sensory area, a region where the brain interprets input from other areas of the body.

Structure and Functions of Parietal Lobe

Parietal lobe is located near the center of the brain, behind the frontal lobe, in front of the occipital lobe, and above the temporal lobe. The central sulcus separates the parietal lobe from the frontal lobe; the parieto-occipital sulcus separates the parietal and occipital lobes; the lateral sulcus is the most lateral boundary, separating it from the temporal lobe; and the medial longitudinal fissure divides the two hemispheres. Within each hemisphere, the somatosensory cortex represents the skin area on the contralateral surface of the body. The parietal lobe has a number of distinct structures, each with its own unique contribution to brain functioning. Those structures include:

Postcentral gyrus: This region is the brain’s primary somatosensory cortex, and maps sensory information onto what is known as a sensory homonculus. Some researchers also refer to this region as Brodmann area 3.

Posterior parietal cortex: This region is thought to play a vital role in coordinating movement and spatial reasoning. It also plays a role in attention, particularly attention driven by new stimuli, such as when an animal jumps into the road while you are driving.

Inferior parietal lobule: Sometimes called Gerschwind’s territory, this region aids in assessing facial expressions for emotional content. Some research suggests it plays a role in other functions, including language processing, basic mathematical operations, and even body image. It contains a number of sub-regions, including the angular and supramarginal gyrus.

Parietal lobe functions in processing sensory information from the various parts of the body. It is heavily related to the sense of touch and involved in the manipulation of objects, as well as in detecting the orientation and numbers of objects encountered. It is also an essential element of spatial information, which gives us the ability to judge size, distance, and shapes. A specific triangular-shaped area known as the parietal association cortex gives us the ability to understand written language and solve mathematical problems. Parietal lobe plays important roles in integrating sensory information from various parts of the body, knowledge of numbers and their relations, and in the manipulation of objects. Its function also includes processing information relating to the sense of touch. Portions of the parietal lobe are involved with visuospatial processing.

The parietal lobes work in concert with other areas of the brain, such as the motor cortex and visual cortex, to perform certain tasks. Opening a door, combing our hair, and placing our lips and tongue in the proper position to speak all involve the parietal lobes. These lobes are also important for understanding spatial orientation and for proper navigation.