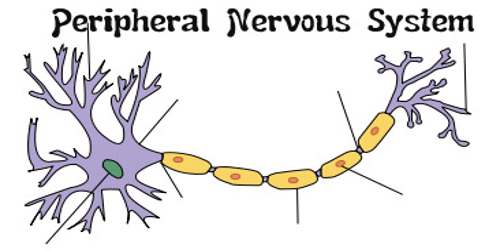 The CNS (central nervous system) is composed of the brain and spinal cord, which function to receive, process, and send information to the PNS. The PNS consists of cranial nerves, spinal nerves, and billions of sensory and motor neurons. The main function of the PNS is to connect the CNS to the limbs and organs, essentially serving as a relay between the brain and spinal cord and the rest of the body. Unlike the CNS, the PNS is not protected by the vertebral column and skull, or by the blood–brain barrier, which leaves it exposed to toxins and mechanical injuries.

The motor (efferent) division carries motor signals by way of efferent nerve fibers from the CNS to effectors (mainly glands and muscles). It can be further subdivided into somatic and visceral divisions. The somatic motor division carries signals to the skeletal muscles. The visceral motor division, also known as the autonomic nervous system, carries signals to glands, cardiac muscle, and smooth muscle. It can be further divided into the sympathetic and parasympathetic divisions. A nerve is an organ composed of multiple nerve fibers bound together by sheaths of connective tissue and a ganglion is a cluster of neuron cell bodies enveloped in an epineurium continuous with that of a nerve.

Peripheral nervous system connections with various organs and structures of the body are established through cranial nerves and spinal nerves.