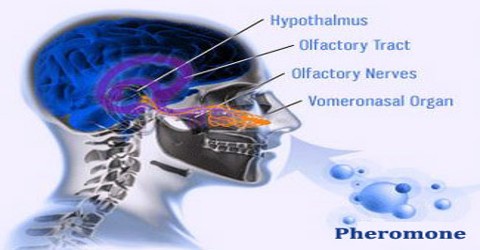 Pheromone is a chemical secreted by an animal that influences the behavior or development of other members of the same species. Queen bees, for example, give off a pheromone that prevents other females in the hive from becoming sexually mature, with the result that only the queen bee mates and lays eggs. In many animal species, pheromones are used to establish territory and attract mates. There are alarm pheromones, food trail pheromones, sex pheromones, and many others that affect behavior or physiology. Pheromones are used from basic unicellular prokaryotes to complex multicellular eukaryotes. Their use among insects has been particularly well documented. In addition, some vertebrates, plants and ciliates communicate by using pheromones.

Pheromones are widespread among insects and vertebrates; they are also found in crustaceans but are unknown among birds. The chemicals may be secreted by special glands or incorporated in other substances, such as urine. They may be shed freely into the environment or deposited in carefully chosen locations. Pheromones are also used by some fungi, slime molds, and algae as attractants in reproduction; organisms of complementary reproductive cell types grow or move toward each other. Pheromones are widely used to promote aggregation. Among social insects such as termites and ants, several different pheromones may transmit the various messages needed to coordinate the complex activities of a colony. Pheromones are also used to signal the presence of danger. It plays a role in sexual attraction and copulatory behaviour, and they have been shown to influence the sexual development of many mammals as well as of insects such as termites and grasshoppers. Such pheromones tend to last relatively longer and extend farther distances than alarm pheromones.

In humans, pheromones are used to promote desirability or to become more attractive to those of the opposite sex. There are many products on the market that contain pheromones which are designed to increase desirability by the opposite sex. Knowing and understanding the different types of pheromones is essential in choosing the right product. Sex pheromones have been studied greatly and their purpose ranges from helping to detect a potential mate to communicating general information about a species.

There are different types of pheromones. Some of these are alarm, food trail and sex pheromones.

Alarm pheromones are produced by certain insect that will act when attacked. Insects such as ants, termites and bees will produce a certain smell when they are attacked by a predator. Some plants also produce them. This will cause other plants inedible to herbivorous.

In insects, there are epideictic pheromones that are used to mark territories. Insects will lay their eggs on certain fruits to signal to other insects that they should find other places to clutch. Territorial pheromones are quite similar to the epideictic ones. It is a term that is used to refer to pheromones produced to mark boundaries by animals like dogs and cats. These animals may use urine as a pheromone sign.

Another type of pheromones is the releaser pheromones. These are the most commonly produced. They are secreted in order to influence the behavior of the same species. Some insects will produce molecules in order to attract males that may be at a distance. This distance may vary from one to two miles, and the smell does not usually last for long.

Processing chemosignals like pheromones has evolved in all animal phyla and thus is the oldest phylogenetic receptive system shared by all organisms including bacteria. It has been suggested that it serves survival by generating appropriate behavioral responses to the signals of threat, sex and dominance status among members of the same species. Copulin is a female pheromone that when released will cause the testosterone levels in men to increase. Just as male pheromones work to increase attraction and sexual appeal in men, copulin works the same way in women.

Furthermore, it has been suggested that in the evolution of unicellular prokaryotes to multicellular eukaryotes, primordial pheromone signaling between individuals may have evolved to paracrine and endocrine signaling within individual organisms.