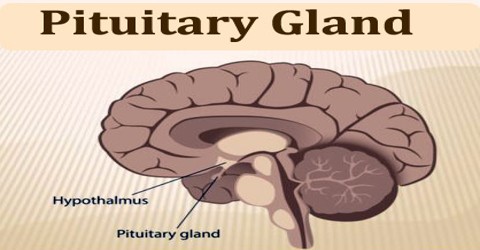 Pituitary gland is a pea-sized gland located in the center of the skull, inferior to the hypothalamus of the brain and posterior to the bridge of the nose. The pituitary gland is very important as it takes messages from the brain and uses these messages to produce hormones that affect many parts of the body, including stimulating all the other hormone-producing glands to produce their own hormones. For this reason it is often referred to as the ‘master gland’. The anterior portion, whose secretions are directly controlled by the hypothalamus, produces hormones that regulate the function of most of the body’s hormone-producing glands and organs, including the thyroid and adrenal glands. Growth hormone is also produced by the anterior pituitary. The posterior pituitary releases antidiuretic hormone (ADH) and oxytocin.

Hormones secreted from the pituitary gland help control: growth, blood pressure, and certain functions of the sex organs, thyroid glands and metabolism as well as some aspects of pregnancy, childbirth, nursing, water /salt concentration at the kidneys, temperature regulation and pain relief. It secretes hormones from both the front part (anterior) and the back part (posterior) of the gland. Hormones are chemicals that carry messages from one cell to another through our bloodstream.

The pituitary is divided into three sections: the anterior, intermediate, and posterior lobes. The anterior lobe is mainly involved in development of the body, sexual maturation, and reproduction. The intermediate lobe of the pituitary gland releases a hormone that stimulates the melanocytes, cells which control pigmentation like skin color through the production of melanin. The posterior lobe produces antidiuretic hormone, which reclaims water from the kidneys and conserves it in the bloodstream to prevent dehydration. Structure and Function of Pituitary Gland The Posterior pituitary is the back portion of the pituitary. It secretes the hormone oxytocin which increases uterine contractions and antidiuretic hormone (ADH) which increases reabsorption of water by the tubules of the kidney. Underproduction of ADH results in a disorder called diabetes insipidus characterized by inability to concentrate the urine and, consequently, excess urination leading potentially to dehydration. The urine is “insipid” (overly dilute). Hormones secreted from the pituitary gland help control the following body processes: The pituitary gland produces a number of hormones. Hormones are essential for many aspects of life. Some send messages to other endocrine glands to tell them to increase or decrease production of their hormones. One such example is TSH, which stimulates the thyroid to grow and produce thyroid hormones. The main hormones produced by the pituitary are: