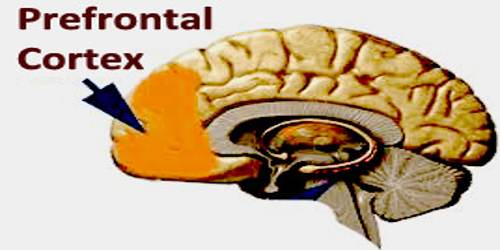 Prefrontal cortex (PFC) is the cerebral cortex which covers the front part of the frontal lobe. It is often called the ‘brain center’ because it takes in information through senses, like touch and sight, and processes it to make decisions about reactions and behaviors. The PFC contains Brodmann areas 8, 9, 10, 11, 12, 13, 14, 24, 25, 32, 44, 45, 46, and 47. This brain region has been implicated in planning complex cognitive behavior, personality expression, decision making, and moderating social behaviour. The basic activity of this brain region is considered to be orchestration of thoughts and actions in accordance with internal goals. The term “prefrontal” as describing a part of the brain appears to have been introduced by Richard Owen in 1868. For him, the prefrontal area was restricted to the anterior-most part of the frontal lobe, which is approximately corresponding to the frontal pole. It has been hypothesized that his choice of the term was based on the prefrontal bone present in most amphibians and reptiles.

The most typical psychological term for functions carried out by the prefrontal cortex area is executive function. Executive function relates to abilities to differentiate among conflicting thoughts, determine good and bad, better and best, same and different, future consequences of current activities, working toward a defined goal, prediction of outcomes, expectation based on actions, and social “control” the ability to suppress urges that, if not suppressed, could lead to socially unacceptable outcomes. The frontal cortex supports concrete rule learning, while more anterior regions along the rostro-caudal axis of the frontal cortex support rule learning at higher levels of abstraction.

Structure and Functions of Prefrontal Cortex

The prefrontal cortex is a several millimeter thick ribbon of gray matter that can be divided into dorsolateral, orbital, and ventromedial regions. This block also includes the adjacent anterior cingulate gyrus (ACG) of the limbic lobe. Each of these regions differs in cytoarchitecture, that is, the size and packing density of the constituent neurons. A Nissl-stained section (center panel) from the dorsolateral prefrontal cortex shows the typical arrangement of cortical neurons into six layers or lamina, numbered from the pial surface of the cortex to the underlying white matter. Distributed across these layers are different types of pyramidal neurons, representing about 75% of cortical neurons, which typically have triangularly-shaped cell bodies, a single apical dendrite directed toward the pial surface, and an array of basilar dendrites. The medial prefrontal cortex has been implicated in the generation of slow-wave sleep (SWS), and prefrontal atrophy has been linked to decreases in SWS. Prefrontal atrophy occurs naturally as individuals age, and it has been demonstrated that older adults experience impairments in memory consolidation as their medial prefrontal cortices degrade. In monkeys, significant atrophy has been found as a result of neuroleptic or antipsychotic psychiatric medication. In older adults, instead of being transferred and stored in the neocortex during SWS, memories start to remain in the hippocampus where they were encoded, as evidenced by increased hippocampal activation compared to younger adults during recall tasks when subjects learned word associations, slept, and then were asked to recall the learned words.

The prefrontal cortex is of significant importance when top-down processing is needed. Top-down processing by definition is when behavior is guided by internal states or intentions. According to the two, “The PFC is critical in situations when the mappings between sensory inputs, thoughts, and actions either are weakly established relative to other existing ones or are rapidly changing”.