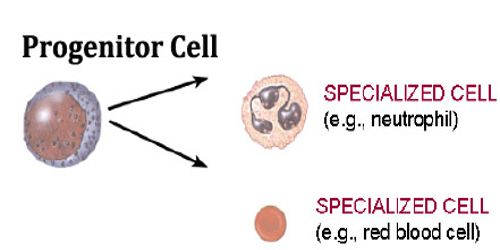 A cell is a group of self-sustaining biochemical reactions that are isolated from the environment by a selectively permeable lipid membrane. Among the key reactions are those that maintain a stable intracellular concentration of ions; for mammalian cells, typical internal concentrations include 140 mM K+, 5-15 mM Na+, 5-15 mM Cl-, and a pH of 7.2.

Progenitor cells are found in adult organisms and they act as a repair system for the body. They replenish special cells, but also maintain the blood, skin and intestinal tissues. They can also be found in developing embryonic pancreatic tissue. Some progenitor cells were found during research, and were isolated. After their marker was found, it was proven that this progenitor could move through the body and migrate towards the tissue where they are needed. Many properties are shared by adult stem cells and progenitor cells.

There are several key factors which separate progenitor and precursor cells from stem cells. Unlike a stem cell, which can be multipotent, pluripotent, or totipotent and have a capacity for unlimited self-renewal as an undifferentiated cell, progenitor cells are typically unipotent (precursor cells) or sometimes oligopotent and have a limited capacity for self-renewal as an undifferentiated cell. In some cases, proliferation and differentiation for progenitor cells are inseparable. The majority of progenitor cells lies dormant or possesses little activity in the tissue in which they reside. They exhibit slow growth and their main role is to replace cells lost by normal attrition. In case of tissue injury, damaged or dead cells, progenitor cells can be activated. Growth factors or cytokines are two substances that trigger the progenitors to mobilize toward the damaged tissue. At the same time, they start to differentiate into the target cells. Not all progenitors are mobile and are situated near the tissue of their target differentiation. When the cytokines, growth factors and other cell division enhancing stimulators take on the progenitors, a higher rate of cell division is introduced. It leads to the recovery of the tissue.