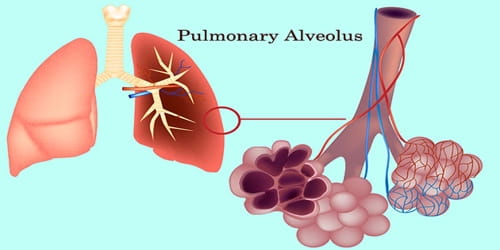 Definition: Pulmonary alveolus (plural: alveoli, from Latin alveolus, “little cavity”), informally known as air sac, is any of the innumerable minuscule, thin-walled, capillary-rich hollow cavities in the mammalian lung that serve as the primary sites of gas exchange between the atmosphere and the blood.

Air, entering the lungs during inhalation, travels through numerous passageways called bronchi and then flows into approximately 300,000,000 alveoli at the ends of the bronchioles, or lesser air passages. During exhalation, the carbon-dioxide-laden air is forced out of the alveoli through the same passageways.

There are three major cell types in the alveolar wall (pneumocytes):

The alveoli have an innate tendency to collapse (atelectasis) because of their spherical shape, small size, and surface tension due to water vapor. Phospholipids, which are called surfactants, and pores help to equalize pressures and prevent collapse.

There are hundreds of millions of such air sacs in the human lung, appearing together in clusters (alveolar sacs) connected to the bronchioles.

Structure and Functions of Pulmonary alveolus: A typical pair of human lungs contain about 700 million alveoli, producing 70m2 of surface area. Each alveolus is wrapped in a fine mesh of capillaries covering about 70% of its area. An adult alveolus has an average diameter of 200 micrometers, with an increase in diameter during inhalation.

The alveoli consist of an epithelial layer and an extracellular matrix surrounded by small blood vessels called capillaries. In some alveolar walls, there are pores between alveoli called Pores of Kohn. The alveoli contain some collagen fibers and elastic fibers. The elastic fibers allow the alveoli to stretch as they are filled with air during inhalation. They then spring back during exhalation in order to expel the carbon dioxide-rich air. Pulmonary alveoli, where gas exchange occurs, are bubble-shaped and have a high degree of curvature. The surface tension of the moist inner surface is due to the attraction between the molecules in the alveolar fluid and tends to make the alveoli contract. Unchecked, this tendency would result in lung collapse. Surfactant greatly reduces the surface tension on the inner surface of the alveoli, thus preventing the alveoli from collapsing during expiration.

The wall of each alveolus, lined by thin flat cells (Type I cells) and containing numerous capillaries, is the site of gas exchange, which occurs by diffusion. The relatively low solubility (and hence the rate of diffusion) of oxygen necessitates the large internal surface area (about 80 square m [96 square yards]) and very thin walls of the alveoli.

Reinflation of the alveoli following exhalation is made easier by pulmonary surfactant, which is a phospholipid and protein mixture that reduces surface tension in the thin fluid coating within all alveoli. The fluid coating is produced by the body in order to facilitate the transfer of gases between blood and alveolar air. The surfactant is produced by the type II cells which are the most numerous cells in the alveoli, yet do not cover as much surface area as the squamous alveolar cells (a squamous epithelium).