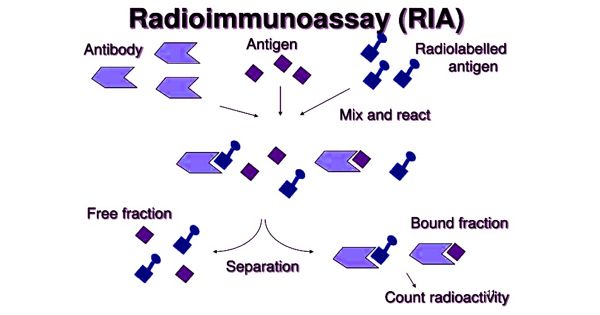 Radioimmunoassay (RIA) is based on the principle of all immunoassays which is the recognition of an antigen present in a sample by antibodies directed against this antigen. It is an immunoassay that uses radiolabeled molecules in the stepwise formation of immune complexes. It uses antibodies to detect and quantitate the amount of antigen (analyte) in a sample. An RIA is very sensitive in vitro assay technique used to measure concentrations of substances, usually measuring antigen concentrations (for example, hormone levels in the blood) by use of antibodies. The principle of radioimmunoassays is very similar to that of competitive ELISA and allows the quantification of small molecules, peptides, and proteins in biological samples.

Radioimmunoassay is an immunological assay. It is basically used to determine the concentration of antigen in the blood serum of the patient with high sensitivity.

The basic principle of radioimmunoassay is competitive binding, where a radioactive antigen (“tracer”) competes with a non-radioactive antigen for a fixed number of antibody or receptor binding sites. Although the RIA technique is extremely sensitive and extremely specific, requiring specialized equipment, it remains among the least expensive methods to perform such measurements. It is very sensitive in vitro technique used to measure the concentration of antigens (eg, hormone levels in the blood) through the use of antibodies directed against these antigens. It requires special precautions and licensing since radioactive substances are used. It has been utilized for quantitative assay of hormones, drugs, hepatitis B surface antigens, IgE and viral antigens, etc.

In a radioimmunoassay, a known amount of antigen is labeled with a radioactive element and mixed with a known amount of antibody directed against that antigen. In contrast, an immunoradiometric assay (IRMA) is an immunoassay that uses radiolabeled molecules but in an immediate rather than stepwise way. When the sample containing the antigen of interest is added, the non-radioactive antigens are substituted for the radioactive antigens.

RIA involves the handling of radioactive materials, restricting its use to licensed laboratories, and causing waste handling problems. Classically, to perform a radioimmunoassay, a known quantity of an antigen is made radioactive, frequently by labeling it with gamma-radioactive isotopes of iodine, such as 125-I, attached to tyrosine. RIA is based on the competitive binding between the radiolabelled antigen (hot antigen) and unlabelled antigen (cold antigen)with a specific antibody. This radiolabeled antigen is then mixed with a known amount of antibody for that antigen, and as a result, the two specifically bind to one another. The concentration of such labeled Molecules is determined by measuring their radioactivity rather than by chemical analysis.

This method can be used for any biological molecule in principle and is not restricted to serum antigens, nor is it required to use the indirect method of measuring the free antigen instead of directly measuring the captured antigen. Itis based upon the competition between labeled and unlabeled antigen for specific antibody sites, forming antigen-antibody complexes. For example, if it is undesirable or not possible to radiolabel the antigen or target molecule of interest, a RIA can be done if two different antibodies that recognize the target are available and the target is large enough (e.g., a protein) to present multiple epitopes to the antibodies. It is an old assay technique, but it is still a widely used assay and continues to offer distinct advantages in terms of simplicity and sensitivity.