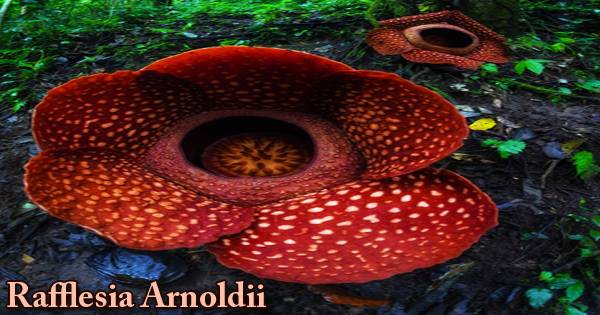 In the parasitic genus Rafflesia, Rafflesia arnoldii is a species of flowering plant. It is parasitic on members of the Tetrastigma genus (in the grape family, Vitaceae). The largest individual flower on Earth is noted for growing it. Since it smells like dead flesh, Rafflesia arnoldii is known as the “corpse flower”. And this herb, unlike other plants, does not use the sun’s energy to make its own food. Instead, it is a parasite; a host, a vine in the grape family, obtains all its nutrients and water. It is native to the Sumatra and Borneo rainforests. While there are some species, such as titan arum (Amorphophallus titanum) and talipot palm (Corypha umbraculifera), with larger flowering organs, these are technically clusters of several flowers. Louis Auguste Deschamps, a French explorer, was the first botanist to discover a Rafflesia specimen (1765-1842). He was a part of a scientific mission to Asia and the Pacific from France.

Endoparasites are members of the family, meaning that the vegetative organs are so reduced and modified that the plant body remains only as a network of thread-like cellular strands that reside almost entirely inside the host plant tissues. In the commonly accepted sense, green photosynthetic tissues, leaves, roots, or stems do not exist, although vestiges of leaves exist as scales in some species. However, the flowers are well-formed and can be extremely large. Rafflesia arnoldii is one of Indonesia’s three national flowers, the other two being Jasminum sambac (white jasmine) and moon orchid (Phalaenopsis amabilis). In 1993, Presidential Decree No. 4 officially recognized it as a national “rare flower” (Indonesian: puspa langka). 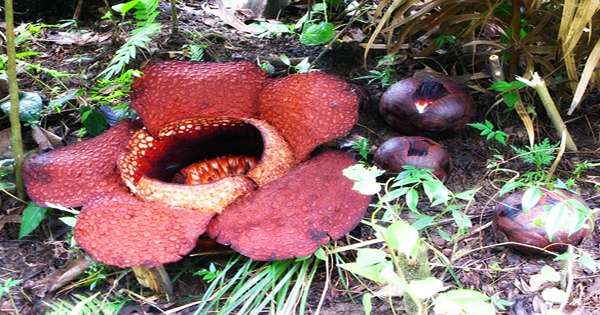 Rafflesia arnoldii has no roots or leaves and lives unnoticed within its host’s woody stems and roots much of the time. It only becomes evident when its plump buds emerge through its host’s bark and develop into the large, fleshy flowers that are pollinated by carrion-flies. It is known as padma raksasa (meaning ‘Giant Rafflesia’) in the Indonesian language. In Sumatra, possibly in the region of Bengkulu, it is called kerubut. It is locally recognized as cendawan biriang in Minangkabau in the nearby kecamatan (‘district’) of Pandam Gadang (nl). The Rafflesiaceae family comprises three genera, mainly in the subtropics of the Old World: Rafflesia (about 28 species), Rhizanthes (4 species), and Sapria (1 or 2 species).

Rafflesia arnoldii, an uncommon, parasitic, rootless and leafless herb, has the world’s largest known flower. This Southeast Asian plant has the largest known individual flower in the world. Rafflesia is also one of the world’s most distasteful plants, bred to resemble rotting meat or dung as if scale and rarity were not enough. The flower is practically a jar, flanked by five lurid red-brick and ‘petals’ of spotted cream, advertising a warm welcome to detritus-hungry carrion flies. Yet in a few pockets of Sumatra, Borneo, Thailand, and the Philippines, the plant is now clinging on to a precarious life, fighting to survive against marauding humans and its own infernal biology.

The Rafflesia arnoldii flower has a diameter of approximately one meter (3.3 feet) and weighs up to 11 kilograms (24 lb). These flowers are usually around 30 cm (12 in) wide from very large, cabbage-like, maroon, or dark brown buds, but the largest (and largest flower bud ever recorded) found was 43 cm (17 in) in diameter at Mount Sago, Sumatra in May 1956. The bud is frequently referred to by Indonesian researchers as a ‘knop’. It is parasitic on members of the Tetrastigma genus (in the grape family, Vitaceae). It has no roots or leaves and lives unseen within its host’s woody stems and roots much of the time. Only when its plump buds emerge through the bark of its host and grow into the large, fleshy flowers pollinated by carrion-flies does Rafflesia arnoldii become noticeable.

Against Rafflesia, all seems stacked; first, it is difficult to germinate the seeds. Then it entirely gambled its life on parasitising only one kind of vine. It’s a dangerously cavalier attitude to life because it’s dead without the vine. The tiny tree Coffea canephora (the well-known robusta coffee), which is actually not native to the region but was introduced from Africa, is the most common plant-associated with Rafflesia arnoldii. As a dense, fleshy five-lobed structure weighing up to 11 kg (24 pounds) and measuring approximately one meter (about one yard) long, the fully formed flower appears aboveground. Five to seven days remain open, releasing a fetid odor that attracts carriage-feeding flies, which are thought to be pollinating agents.

It has been found that Rafflesia arnoldii infects hosts that grow in alkaline, neutral and acidic soils. It is not found far from the water; it has been found at altitudes of 490 to 1,024 meters. The diameter of the flowers is up to 1 m, and their flesh is reddish-brown with white spots. Each flower consists of five lobes inserted on a cup-like structure and is either male or female. A column with a disk is in the middle of the cup. Underneath the disks are the anthers (male parts) or styles (female parts). The fruit is a berry that produces sticky seeds that are believed to be dispersed by rodents consuming fruit. Some members of the genus have reproductive biology that is similar. 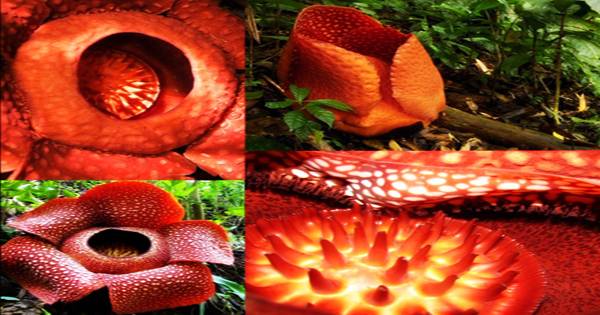 Since the flower only lasts for a few days, the surrounding flower of the opposite sex has to mate quickly. The problem is, now the male and female flowers are so rare that having a pair ready to cross-pollinate each other is a miracle. Many Rafflesia growing sites are now popular with visitors, who provide local people with an income and also an opportunity to protect the species. Unfortunately, the number of flower buds produced each year has decreased significantly at many sites as a result of this ecotourism and the consequent human disturbance.

To be honest, however, the lifestyle of Rafflesia is not so absurd. After all, few other plants eat so well that they have evolved monstrous flowers. In traditional medicine, flower buds are applied to facilitate delivery and healing during and after childbirth. They are used as aphrodisiacs as well. Instead of being related to some chemical properties, these uses are likely to be correlated with the form, color, and size of the buds and superstitions surrounding the flower. There are at least 13 species of Rafflesia, but two of them have been unseen and believed to be extinct since the Second World War, and the record-holding Rafflesia arnoldii faces extinction. No one has ever cultivated Rafflesia in a greenhouse or laboratory in order to make matters worse.