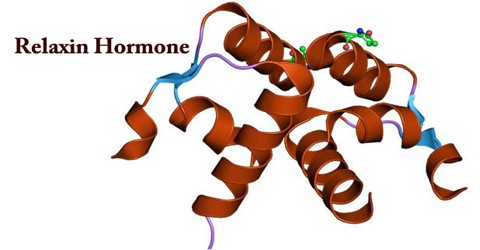 Relaxin is one of the hormones secreted by the ovaries, uterus and the placenta during pregnancy. Production of relaxin ramps up during pregnancy, which is responsible for loosening up joints and ligaments. The pelvic joints and ligaments soften up enough for the baby to be delivered smoothly through the birth canal in labor. In that sense, relaxin is one of the hormones that make giving birth possible. Relaxin also inhibits contractions of the uterus and may play a role in determining the timing of delivery. In the female, it is produced by the corpus luteum of the ovary, the breast and, during pregnancy, also by the placenta, chorion, and decidua. In the male, it is produced in the prostate and is present in human semen.

Relaxin interacts with the relaxin receptor LGR7 (RXFP1) and LGR8 (RXFP2), which belong to the G protein-coupled receptor superfamily. They contain a heptahelical transmembrane domain and a large glycosylated ectodomain, distantly related to the receptors for the glycoproteohormones, such as the LH-receptor or FSH-receptor.

Relaxin receptors have been found in the heart, smooth muscle, the connective tissue, and central and autonomous nervous system. The role of relaxin in men is less clear. However, there is evidence that it may increase the movement of sperm cells in the semen.

Relaxin belongs to the same family of hormones as insulin. Over the last decade, several relaxin-like peptides have been discovered, although the function of these peptides remains unclear.

Recent studies have revealed effects of relaxin on other systems in the body. Relaxin decreases tissue fibrosis in the kidney, heart, lungs and liver, and promotes wound healing. Tissue fibrosis is the formation of hard tissue as a result of inflammation which can lead to scarring and loss of organ function. This has made relaxin of interest to scientists studying how the heart heals after it has been damaged, which may help to treat heart failure in the future. In addition, relaxin can influence blood pressure by relaxing blood vessels; promote the growth of new blood vessels; and is also anti-inflammatory. All of these properties could make it a potential therapeutic target for the treatment of certain diseases.

The effects of relaxin are most well-described during the female reproductive cycle and pregnancy. Relaxin levels in the circulation rise after ovulation, during the second half of the menstrual cycle. At this stage it is thought to relax the wall of the uterus by inhibiting contractions, and it also prepares the lining of the uterus for pregnancy.  If pregnancy does not occur, relaxin levels drop again. During pregnancy, relaxin levels are at their highest in the first trimester. At this time it is believed to promote implantation of the developing foetus into the wall of the uterus and the growth of the placenta. Early in pregnancy, relaxin also inhibits contractions in the wall of the uterus, to prevent premature childbirth. Relaxin can regulate the mother’s cardiovascular and renal systems to help them adapt to the increase in demand for oxygen and nutrients for the foetus, and to process the resulting waste products. It is thought to do this by relaxing the mother’s blood vessels to increase blood flow to the placenta and kidneys. Structure and Function of Relaxin

The relaxin peptide family in humans consists of seven members, relaxin-1, -2 and -3 and insulin-like (INSL) peptides 3, 4, 5 and 6. It is an offshoot of the large insulin superfamily. Each member consists of two chains, commonly referred to as A and B, which are held together by two inter-chain disulfide bonds and another intra-chain disulfide bond present within the A chain. The cysteines residues present in each chain, together with the distinctive disulfide bonding pattern, are conserved across all members of the superfamily. The chemical synthesis of these complex peptides poses a significant challenge. Nowadays, with the aid of highly efficient solid phase peptide synthesis methodologies, in conjunction with selective S-thiol-protecting groups, combination of individual A- and B- chains by sequential chemical formation of each of the three disulfide bonds is now possible resulting in good yields of these peptides. The relaxin peptide family members bind to G-protein coupled receptors (GPCRs) which have been classified as relaxin family peptide (RXFP) receptors. The control of relaxin release in humans is not fully understood. It is believed that relaxin production by the ovary during the menstrual cycle is stimulated by luteinising hormone from the pituitary gland, and that its release during pregnancy is also stimulated by human chorionic gonadotrophin from the placenta. It remains unclear whether relaxin can feed back to the pituitary or the foetus to affect luteinising hormone or human chorionic gonadotrophin levels and so control its own release. Relaxin carries out its actions on the reproductive system and other organs by activating specific receptors on these tissues.