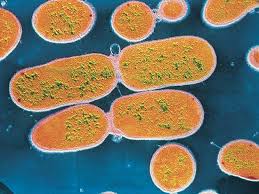 Sexual Reproduction: In bacterial sexual reproduction there is no meiosis, formation of gametes and zygote. Instead, it involves transfer of a portion of genetic material (DNA) from a donor cell to a recipient cell. This process is called as genetic recombination or parasexuality. It is known to occur in the following three ways:

Conjugation: It is a process in which the genetic material of a bacterial cell of a particular strain is transferred into that of another bacterial cell of a different strain. Of the two strains of bacteria involved, one acts as donor (or male) and the other as a recipient (or female). The donor cells are known to possess a sex factor or fertility factor (F factor) as a component of its circular DNA (F+ strain). The recipient cell does not have this factor and hence it is described as F- strain. A conjugation between cells of F+ and F- strains always results in the formation of F+ bacterial cells in the progeny.

A) Binary fission: It is the most common mode of asexual reproduction. The cytoplasm and nucleotide of a bacterial cell divide equally into two, following replication of DNA. The cell wall and cytoplasm also split resulting in the formation of two daughter cells.

Under favorable conditions, a bacterial cell divides by fission once in every 20 minutes.

B) Budding in bacteria: Some bacteria reproduce by budding process in which small bud develops at one end of cell, this enlarge and developed into new cell and separate from the mother cell. Budding has been observed in some Gram-Positive Bacteria eg. Planctomycetes, Cyanobacteria.

C) Fragmentation: It is a form of asexual reproduction or cloning where an organism is split into fragments. Bacteria that reproduce extensive filamentous growth, reproduce by fragmentation of the filaments into small bacillary or coccoid cells, each of which gives rise to new growth.

D) Septum formation: Synthesis of new wall begins at the equatorial ridge. From this site new wall grows peripherally. Half of the entire wall of each daughter cell is derived from the septum.

In autecological studies, bacterial growth in batch culture can be modeled with four different phases: lag phase (A), exponential or log phase (B), stationary phase (C), and death phase (D).