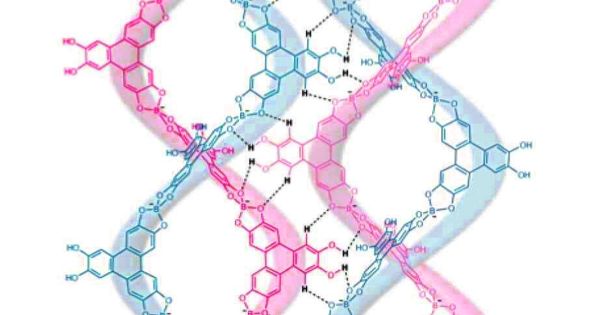 Scientists led by a team from the University of Colorado Boulder have cracked the code, allowing them to create synthetic versions of these large DNA-like molecules for the first time. They were able to construct a helical covalent polymer that rivals the sophistication of those found in nature using dynamic covalent chemistry, a chemistry tool pioneered by these researchers that focuses on reversible binding interactions with self-correction capabilities. They were also able to confirm its existence with absolute certainty using single-crystal X-ray diffraction (a powerful, non-destructive way to characterize single crystals using light).

Previously, scientists could only solve individual pieces of the puzzle. This new discovery, published last week in Nature Chemistry, completes it, potentially opening up this critical and understudied field to new research with implications ranging from the creation of artificial enzymes, which has already found success in various medical applications, to the creation of biomimetic materials (materials that mimic processes found in nature).

Double helical covalent polymers—which are spiraling collections of nature’s building blocks—are fundamental to life itself, and yet, despite decades of research, scientists have never been able to synthesize them in their entirety like their non-helical brethren—until now.

“People very rarely can see what’s really going on in synthetic polymers in terms of atom spatial locations, inter-chain interactions, how they’re bonding, how they twine and wind at the atomic level,” said Wei Zhang, a study author and CU Boulder professor of chemistry. “But with single crystals, we can actually see the atom, the bonds, how long they are, and how they interact. That’s why obtaining a polymer’s single crystal structure is such a big deal.”

Polymers are substances or materials formed by the natural or synthetic bonding of many smaller, similar units (such as glucose and amino acids). Silk, wool, DNA, proteins, enzymes, and cellulose are examples of naturally occurring polymers, whereas synthetic polymers are created by scientists or engineers and include materials such as plastics.

Synthetic polymers are classified according to their construction, which includes whether they are linear or helical, the number of strands, and the length of the strands. Scientists have found helical polymers to be the most difficult to synthesize, with double-stranded polymers being the most difficult of all, with only short helical oligomers available so far (a polymer with very few repeating units). That is, until this new research.

Zhang and colleagues were able to create a DNA-like covalent helical polymer using a chemical tool they invented, dynamic covalent chemistry. When they did this, they discovered more than just the large molecule. They also discovered single crystals.

“That was a pleasant surprise,” Zhang remarked. “We were ecstatic at the end of the reaction when we noticed some shining single crystals lying at the bottom of the reaction vessel. We stated, “Oh my goodness! Okay, let’s give it a shot (X-ray diffraction).” It is extremely difficult to obtain a single crystal of a polymer.”

Using single-crystal synchrotron X-ray diffraction, the researchers were able to confirm beyond a shadow of a doubt that they had accomplished the previously unthinkable. This discovery, however, is only the beginning for them and this important field of study.

The researchers intend to play with and explore the structure itself after delving a little deeper into it, to see if they can make the crystals themselves larger (they are currently fairly small) and if they can control the chirality, or spiral nature, of the polymer, which could have broad implications for catalysis (chemical reaction process utilizing catalysts), signal transduction, and other applications.

“There is a lot of rational design, synthesis, structure-property relationship work that we need to do,” Zhang said. “Ultimately we want to demonstrate this is a very powerful platform for smart biomimetic materials design.”