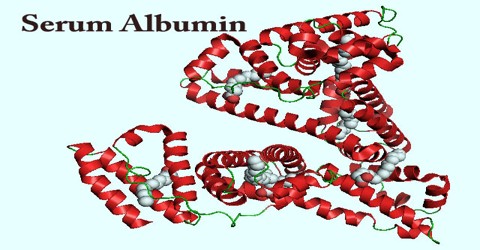 Serum Albumin is a crystallizable albumin or mixture of albumins that normally constitutes more than half of the protein in blood serum, that serves to maintain the osmotic pressure of the blood, and that is used in transfusions especially for the treatment of shock. The serum albumin level falls and rises in such liver disorders as cirrhosis or hepatitis. Transfusions of serum albumin are used to combat shock and whenever it is necessary to remove excess fluid from the tissues. Similar albumin compounds with other functions occur in plants, animal tissues, egg whites, and milk. Serum Albumin accounts for 55 percent of the total protein in blood plasma. Circulating blood tends to force fluid out of the blood vessels and into the tissues, where it results in edema (swelling from excess fluid). The colloid nature of albumin—and, to a lesser extent, of other blood proteins called globulins—keeps the fluid within the blood vessels.

It is produced by the liver, occurs dissolved in blood plasma and is the most abundant blood protein in mammals. Albumin is essential for maintaining the oncotic pressure needed for proper distribution of body fluids between blood vessels and body tissues; without albumin, the high pressure in the blood vessels would force more fluids out into the tissues. It also acts as a plasma carrier by non-specifically binding several hydrophobic steroid hormones and as a transport protein for hemin and fatty acids.

Structure and Functions of Serum Albumin The exact function of albumin has been debated, much of the present data support the notion that the principal role of albumin in the circulatory system is to aid in the transport, metabolism, and distribution of exogenous and endogenous ligands. The most outstanding property of albumin is its ability to bind reversibly an incredible variety of ligands. The sequences of all albumins are characterized by a unique arrangement of disulfide double loops that repeat as a series of triplets. Albumin belongs to a multigene family of proteins that includes α-fetoprotein (AFP) and vitamin D-binding protein (VDP), also known as G complement (Gc) protein. Although AFP is considered the fetal counterpart of albumin, its binding properties are distinct and it is suggested that AFP may have a higher affinity for some unknown ligands important for fetal development. Domain structure and the arrangement of the disulfides, the surface charge distribution, and the conformational flexibility of the albumin molecule are described. The nature of ligand binding, including small organics, long-chain fatty acids, and metals, to multiple sites on the albumin molecule is clearly depicted. The chapter concludes with the perceptive comments on future directions being taken to explore the structure and function of this fascinating protein.

Serum Albumin functions primarily as a carrier protein for steroids, fatty acids, and thyroid hormones in the blood and plays a major role in stabilizing extracellular fluid volume by contributing to oncotic pressure, also known as colloid osmotic pressure of plasma. Serum Albumin is well established that free radicals and reactive oxygen species (ROS), nitrogen, and chlorine species contribute to the development of several age-related diseases by inducing oxidative stress and oxidative damage. Oxidative stress is commonly defined as a disturbance in the prooxidant and antioxidant balance leading to damage of lipids, proteins, and nucleic acids. Production of ROS is not only intracellular but also concerns the surrounding area. Blood carries oxygen to tissues, and oxygen partial pressure is about 100 mm Hg in the arterial circulation and drops rapidly at the tissue levels with values between 4 and 20 mm Hg.

Albumin contains 585 amino acids and has a molecular weight of 66 kDa. This highly soluble protein is present in human plasma at normal concentrations between 35 and 50 g/l. It is a key element in the regulation of osmotic pressure and distribution of fluid between different compartments. Albumin is well known for its ability to bind molecules, such as metals ions, fatty acids, drugs, and also hormones. The flexibility of the albumin structure adapts it readily to ligands, and its three domain design provides a variety of binding sites. It is a negatively charged. The glomerular basement membrane is also negatively charged in the body; some studies suggest that this prevents the filtration of albumin in the urine. According to this theory, that charge plays a major role in the selective exclusion of albumin from the glomerular filtrate. A defect in this property results in nephrotic syndrome leading to albumin loss in the urine. Nephrotic syndrome patients are sometimes given albumin to replace the lost albumin.