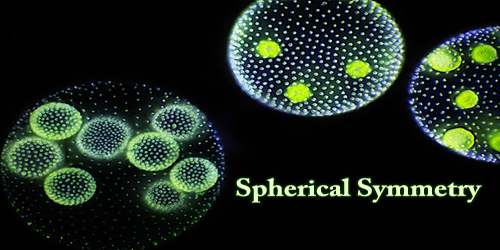 In biology, symmetry is always approximate; it can be seen as a balanced distribution of duplicate body parts or shapes within an organism’s body. But there are types of biological symmetry more generally found in nature; spherical symmetry, which defines an organism that can be separated into two identical halves by any cut or line passing through its center. Symmetry is one class of patterns in nature whereby there’s near-repetition of the pattern element, either by reflection or rotation.

In order for an organism to exhibit spherical symmetry, its body must be shaped like a sphere, and all parts must be similarly organized or radiated around a center. There are no ends or sides of such an object and any plane going through the middle would break the object into equal halves. The importance of symmetry is demonstrated by the fact that this feature has historically identified groups of animals within taxonomic groupings.

The spherical form of symmetry is feasible only in minute animals of easy internal construction since in spheres the inside mass is large relative to the extent and becomes large for efficient functioning with a rise in size and complexity. Real spherical symmetry is not present in animal body plans; the freshwater green alga Volvox contains species that exhibit approximate spherical symmetry.

Thus, any division through the middle point of the organism creates two halves that mirror each other. This unique level of symmetry is usually noted as point symmetry or universal symmetry. Bacteria are also referred to as having a ‘spherical’ form; bacteria are divided into three groups based on their shapes: cocci (spherical), bacillus (rod-shaped), and spirochetes (spiral-shaped) cells.

In fact, spherical symmetry is a severe over-simplification because bacterial cells can be curved, bent, flattened, oblong spheroids, and many more types. Apparently, spherical symmetry is only possible in very small organisms since relatively large is the requisite ratio of internal mass to surface area and could not be preserved in larger species. Distinguishing between the simplistic use of the word ‘spherical’ to describe organisms at ease and the true meaning of spherical symmetry is important. The same situation is seen within the description of viruses ‘spherical’ viruses don’t necessarily show spherical symmetry, usually, they’re icosahedral. Like all the traits of organisms, symmetry (or indeed asymmetry) evolves because of a plus to the organism a process of a natural process. This involves changes within the frequency of symmetry-related genes throughout time.