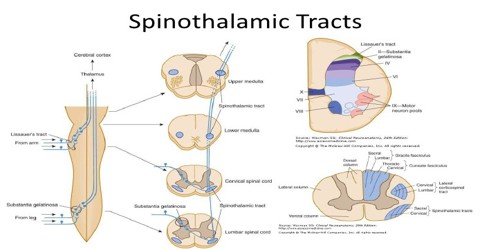 Spinothalamic Tract is a large ascending bundle of fibers in the ventral half of the lateral funiculus of the spinal cord, arising in the posterior horn at all levels of the cord and continuing into the brainstem. It is also known as the ventrolateral system or anterolateral system. It is a sensory pathway from the skin to the thalamus. From the ventral posterolateral nucleus in the thalamus, sensory information is relayed upward to the somatosensory cortex of the postcentral gyrus. In the spinal cord, the spinothalamic tract has somatotopic organization. This is the segmental organization of its cervical, thoracic, lumbar, and sacral components, which is arranged from most medial to most lateral respectively.

Structure and Functions of Spinothalamic Tract

Spinothalamic tract is a sensory tract that transmits information from the skin to the thalamus in the brain. The anterolateral system is composed of:

The anterior and lateral spinothalamic tracts. The former helps localize crude touch and pressure, the latter painful or temperature sensation.

The spinoreticular tract, which is responsible for increasing our level of arousal/alertness in response to the pain or temperature. The fibres ascend from the muscles, joints and skin to synapse in the reticular formation.

The spinotectal tract, which enables us to orient our eyes and move our head toward the relevant stimulus. The fibres ascend to synapse in the superior colliculi of the midbrain. Pseudounipolar neurons in the dorsal root ganglion have axons that lead from the skin into the dorsal spinal cord where they ascend or descend one or two vertebral levels via Lissauer’s tract and then synapse with secondary neurons in either the substantia gelatinosa of Rolando or the nucleus proprius. These secondary neurons are called tract cells.

The types of sensory information transmitted via the spinothalamic tract are described as affective sensation. This means that the sensation is accompanied by a compulsion to act. For instance, an itch is accompanied by a need to scratch, and a painful stimulus makes us want to withdraw from the pain.