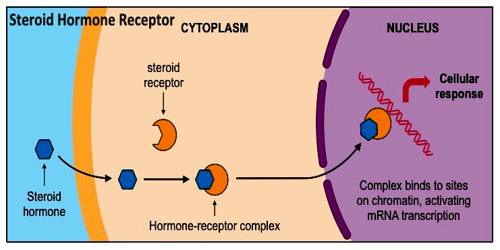 Steroid hormone receptor includes 48 receptors for the gonadal and adrenal steroids, nonsteroidal ligands such as thyroid hormones, vitamin D, retinoic acid, and fatty acids, as well as numerous “orphan” receptors whose endogenous ligands, if necessary, are either as yet unknown or being identified.4, 5 Until late 1996, only one ER was thought to mediate the physiological effects of estrogens. Transcriptional repression by steroid hormone receptors is mediated by the recruitment of corepressors. These molecules can function by competing with coactivators for the LBD on steroid receptors. This is the mechanism for the selective estrogen receptor corepressor REA (repressor of estrogen action), which directly competes with SRC1. Other transcriptional corepressors, however, bind the LBD either in the absence of ligand or in the presence of antagonists.

Steroid hormone receptors regulate gene function, it is important to know the structure of the receptor proteins as well as the identity and cellular function of the genes that they regulate. Members of the steroid receptor superfamily share direct amino acid homology and a common structure. Receptors in this superfamily contain several key structural elements which enable them to bind to their respective ligands with high affinity and specificity, recognize and bind to discrete response elements within the DNA sequence of target genes with high affinity and specificity, and regulate gene transcription. The transcription of DNA to messenger RNA (mRNA) is the most important process regulated by steroid hormones. All genes share a common basic design, composed of a structural region in which the DNA encodes the specific amino acids of the protein, and a regulatory region that interacts with various proteins to control the rate of transcription. Several key elements in the regulatory region of the target gene must be activated before mRNA synthesis can occur.