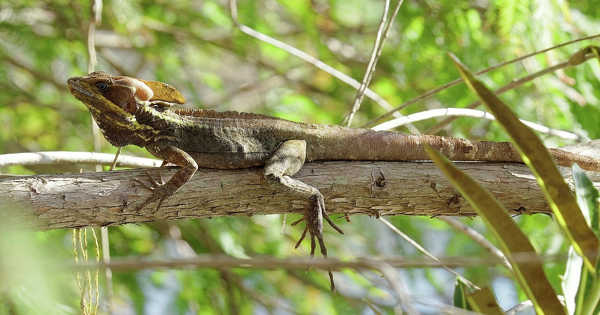 Many lizards are excellent climbers. Their curved, sharp claws are ideal for clinging to tree trunks, rocks, and other rough surfaces. However, in the perilous world of treetops, where slippery leaves and unstable branches abound, three unusual groups of lizards have a remarkable evolutionary advantage: sticky pads on their fingers and toes.

Sticky toepads have evolved independently in geckos, skinks, and Anolis lizards, resulting in tree acrobats that are uniquely adapted to life in the forest canopy. Sticky toepads have long been regarded as a “evolutionary key innovation,” allowing arboreal lizards to interact with their surroundings in ways that many padless lizards cannot.

Despite this, some lizards without toepads have adopted the canopy lifestyle, which has perplexed scientists for decades. Aryeh Miller and James Stroud of Washington University in St. Louis set out to discover whether lizards with toepads had an evolutionary advantage for tree life over their padless counterparts.

They analyzed data from 2,600 lizard species worldwide and discovered that, while hundreds of different types of lizards evolved arboreal lifestyles independently, species with sticky toepads predominated.

“Lizards with toepads have a greater ecological advantage in the arboreal environment,” said Miller, the study’s lead author and a graduate student in the Evolution, Ecology, and Population Biology program at Washington University. “Toepads are essentially a biological superpower for lizards, allowing them to access new resources that other lizards cannot.”

“We discovered that lizards with sticky feet dominate the arboreal environment, and once adapted to life in the trees, they rarely leave,” said Stroud, the paper’s senior author and a postdoctoral research associate in Arts & Sciences. “Lizards without sticky toepads, on the other hand, frequently transition from living in trees to living on the ground.”

The study is published in Systematic Biology.

“Scientists have long wondered about the role that key innovation plays in subsequent evolutionary diversification, and lizards are an excellent type of organism for such studies due to their exceptional species richness and incredible extent of anatomical variation and habitat use,” said Jonathan Losos, the William H. Danforth Distinguished University Professor and professor of biol.

Using a recently published database of habitat use for nearly every lizard species worldwide, the researchers were able to perform a comprehensive analysis of toepad evolution in the context of lizard habitat use — for the first time, the evolutionary relationships between which lizards live in trees and which do not become clear.

“Miller and Stroud have developed an elegant new approach to understanding this diversity and the role that anatomical evolution plays in shaping the great diversity of lizard kind; this work will be a model for researchers working on many types of plants, animals, and microbes,” Losos added.

Miller, who led the study, is the first to discover that thousands of lizards have evolved for specialized life in trees at least 100 times. In other words, it is relatively simple for a lizard to evolve into a tree lizard. What’s difficult is remaining (pun intended!). Toepads do not develop until lizards enter the trees, not before. And padless lizards leave trees at a much higher rate than pad-bearing lizards.

“Hundreds of lizards live in trees, but over evolutionary time, many of those species end up leaving for life on the ground because, presumably, they interact with these padded lizards that have a greater advantage,” Stroud explained.

The next step in this investigation will be to determine exactly what pad-bearing lizards can do that their padless relatives cannot. Scientists can learn more about this by observing the animals in their natural environment.