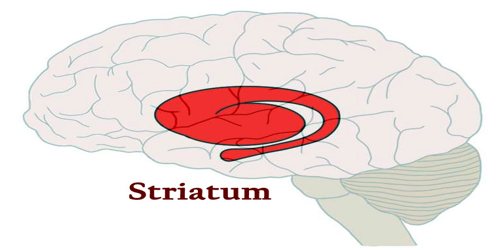 Striatum is a subcortical part of the forebrain and a critical component of the reward system. It is also known as the neostriatum or striate nucleus. It is also called the striate body. The term striatum (striate) refers to the layered appearance of bands of gray matter that course from one of these nuclei to the other and represent the connections between them. It receives glutamatergic and dopaminergic inputs from different sources and serves as the primary input to the rest of the basal ganglia system. Functionally, the striatum coordinates multiple aspects of cognition, including motor- and action- planning, decision-making, motivation, reinforcement, and reward perception. Structurally, when the globus pallidus (pale globe) is included with the striatum, they form the corpus striatum structure. The lentiform nucleus refers to the putamen of the dorsal striatum and the globus pallidus.

The striatum comprises three separate structures: the caudate nucleus; the putamen; and the fundus, which links the caudate nucleus and putamen together. All of these structures are also part of the basal ganglia system, which plays a major role in learning, motor control, and several other cognitive processes. Large amounts of sensory input are received via the striate nucleus and channeled to other structures in the basal ganglia for processing.

Structure and Functions of Striatum

The striatum is divided into ventral and dorsal subdivisions, based upon function and connections.

The ventral striatum is composed of the nucleus accumbens and olfactory tubercle in primates. Functionally, the striatum coordinates multiple aspects of cognition, including motor and action planning, decision-making, motivation, reinforcement, and reward perception. The corpus striatum, a macrostructure which contains the striatum, is composed of the entire striatum and the globus pallidus. The lenticular nucleus refers to the putamen together with the globus pallidus. The dorsal striatum is composed of the caudate nucleus and the putamen. Staining can differentiate the dorsal striatum into compartments of striosomes and surrounding matrix; this is particularly evident on the components of acetylcholinesterase and calbindin.

The striatum is heterogeneous in terms of its component neurons.

Adult humans continuously produce new neurons in the striatum, and these neurons could play a possible role in new treatments for neurodegenerative disorders. There are several different types of neurons located within the striate nucleus. Most of this part of the brain is made up of medium spiny neurons, which are important in controlling body, limb, and eye movement. Around 1% of cells are spidery cholinergic interneurons, which respond to a neurotransmitter called acetylcholine, and are thought to play a role in determining behavioral responses.

Several different cognitive functions and processes are known to be associated with the striatum of the brain. The most well-defined role of this structure is in planning and executing pathways of movement. In addition, the striate nucleus is important in the reward pathway. This term describes the complex network of brain processes that regulate motivation, and the generation of rewarding feelings and sensations. The reward pathway provides the body or mind with a reward, such as pleasurable sensations or feelings, for executing behaviors which promote individual or species survival.

The importance of the striate nucleus is reflected not only in the types of functions it is associated with, but also in the types of diseases which affect this region of the brain. Two of the most devastating progressive brain disorders, Parkinson’s disease and Huntington’s disease, are associated with striatum dysfunction. In each case, disruption of the striate nucleus leads to disruption of the processes this part of the brain is involved in regulating. Addiction, a disorder of the brain’s reward system, arises through the overexpression of ΔFosB, a transcription factor, in the D1-type medium spiny neurons of the ventral striatum. ΔFosB is an inducible gene which is increasingly expressed in the nucleus accumbens as a result of repeatedly overdosing on an addictive drug or overexposure to other addictive stimuli.

In Huntington’s disease, a mutant form of a protein called huntingtin accumulates in the striate nucleus, preventing normal function and leading to movement and behavior disorder.