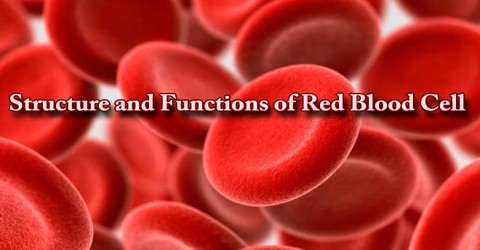 Red Blood Cell or RBC also called erythrocyte, cellular component of blood, millions of which in the circulation of vertebrates give the blood its characteristic colour and carry oxygen from the lungs to the tissues. Red blood cells (RBC) are sometime simply called red cells. Red cells contain hemoglobin and it is the hemoglobin which permits them to transport oxygen and carbon dioxide. Hemoglobin, aside from being a transport molecule, is a pigment. It gives the cell its red color. A red blood cell is sometimes simply referred to as a red cell. It is also called an erythrocyte or, rarely today, a red blood corpuscle. The mature human red blood cell is small, round, and biconcave; it appears dumbbell-shaped in profile. The cell is flexible and assumes a bell shape as it passes through extremely small blood vessels. It is covered with a membrane composed of lipids and proteins, lacks a nucleus, and contains hemoglobin—a red, iron-rich protein that binds oxygen. In humans, mature red blood cells are flexible and oval biconcave disks. They lack a cell nucleus and most organelles, in order to accommodate maximum space for hemoglobin; they can be viewed as sacks of hemoglobin, with a plasma membrane as the sack. Approximately 2.4 million new erythrocytes are produced per second in human adults. The cells develop in the bone marrow and circulate for about 100–120 days in the body before their components are recycled by macrophages. Each circulation takes about 60 seconds (one minute). Approximately a quarter of the cells in the human body are red blood cells. Nearly half of the blood’s volume (40% to 45%) is red blood cells.

Red Blood Cells have an unusual structure compared to other cells in the human body. It lacks a nucleus, mitochondria or endoplasmic reticulum. However enzymes within the red blood cells allow it to produce small amounts of energy (ATP from glucose). The most important part of a red blood cell is hemoglobin, which is essentially the functional component of the cell. Hemoglobin is the molecule that is responsible for the oxygen carrying capacity of a red blood cell. It also gives these cells a red color and is a combination of heme and globin. Heme is formed when succinyl-CoA binds with glycine to form a pyrrole molecule. Four of these pyrrole molecules combine to form protoporphyrin IX which binds with iron to form the heme molecule. Globin is a long polypeptide chain.

Blood has three main functions: transportation, regulation and protection. Red Blood Cells, are the most abundant cell type in the human body. Additionally, erythrocytes are anucleated, which means they don’t have a nucleus. This extra room allows for more hemoglobin to be stored in our red blood cells. Hemoglobin is a respiratory pigment, which binds to either oxygen or carbon dioxide. This allows oxygen to be transported around our body to our tissues and organs (and carbon dioxide to be taken away). Hemoglobin is largely comprised of iron, which when combined with oxygen; gives blood its red color. Additionally, blood helps cycle nutrients and hormones throughout our bodies. Blood also helps us maintain homeostasis by regulating our internal body pH and temperature as well as how much water is in our bodies at a given time. Plasma, our connective tissue matrix, is about 90% water. Blood is also vital in protecting our bodies. Blood loss is controlled with clotting mechanisms, and white blood cells provide immune response. Some other functions are: