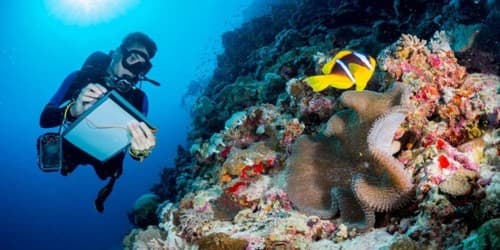 Marine biology is a very broad area, so most researchers select a particular area of interest and specialize in it. The study of how the sea works is oceanography. Specializations can be based on a particular species, group, behavior, technique, or ecosystem. There are many kinds of marine animals and plants to study. Marine animals include squids, corals, whales, and fish. Marine plants include seagrasses and algae. The Census of Marine Life was a ten-year project of marine biology.

Life in the sea has been a subject of fascination for thousands of years. Marine biology may have begun in 1200 BC when the people started to explore the ocean. Scientists estimate that no more than 5% of the oceans have been explored. During the Age of Discovery, many more ships sailed far from home. Captain James Cook. He went around the would twice while finding new discoveries. Another person who helped is Charles Darwin, known for the Theory of Evolution. He helped a lot in marine biology. His expeditions aboard the HMS Beagle from 1831-1836 to collect marine organisms.

One marine animal that is regularly seen in this position is called the lionfish also known as the zebrafish, firefish, turkey fish, or butterfly cod. It has a pattern of red, white, cream, or black stripes. This fish is an invasive species meaning that it shouldn’t be in as many waters as it is. Another animal is the clownfish is usually orange, or yellow, and black and white stripes.

One of the many habitats in the vast ocean is the coral reef. Coral reefs are very colorful. The corals are hard because of hard skin like a shell, protecting the insides. These corals are in the same group as jellyfish. This animal eats smaller animals but they hold 25% of all fish. Alone corals are called Polyp.