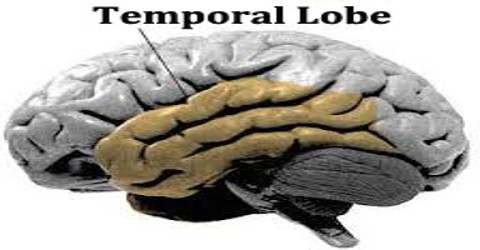 Temporal Lobe is the lobe of each cerebral hemisphere lying to the side and rear of the frontal lobe. The temporal lobe controls hearing and some aspects of language perception, emotion, and memory. It is located beneath the lateral fissure on both cerebral hemispheres of the mammalian brain. The temporal lobe contains the auditory cortex which is responsible for hearing. It is also the site of the seizure activity characteristic of temporal-lobe epilepsy. Temporal Lobe epilepsy is a chronic neurological condition characterized by recurrent seizures; symptoms include a variety of sensory (visual, auditory, olfactory, and gustation) hallucinations, as well as an inability to process semantic and episodic memories. The most common symptom of inferior temporal lobe damage is visual agnosia, which involves impairment in the identification of familiar objects. Another less common type of inferior temporal lobe damage is prosopagnosia which is impairment in the recognition of faces and distinction of unique individual facial features.

Structure and Functions of Temporal Lobe

The temporal lobe houses our ability to receive and interpret auditory information from the ear. It also collects and interprets information from the nose. It is the primary area of the brain for dealing with sensory input. It consists of structures that are vital for declarative or long-term memory. Declarative (denotative) or explicit memory is conscious memory divided into semantic memory (facts) and episodic memory (events). The temporal lobe is also believed to be part of long-term memory, such as remembering autobiographical information, dates, and places. The hippocampus is critical for memory formation, and the surrounding medial temporal cortex is currently theorized to be critical for memory storage. The prefrontal and visual cortices are also involved in explicit memory.

The areas associated with vision in the temporal lobe interpret the meaning of visual stimuli and establish object recognition. The ventral part of the temporal cortices appear to be involved in high-level visual processing of complex stimuli such as faces (fusiform gyrus) and scenes (parahippocampal gyrus). Anterior parts of this ventral stream for visual processing are involved in object perception and recognition.