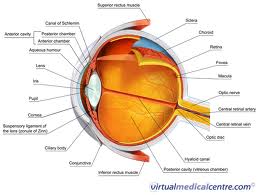 The Anatomy of the Eye

The human eye is a complex anatomical device that remarkably demonstrates the architectural wonders of the human body. Like a camera, the eye is able to refract light and produce a focused image that can Stimulate neural responses and enable the ability to see.

We will use our understanding of refraction and image formation to understand the means by which the human eye produces images of distant and nearby objects. Additionally, we will investigate some of the common vision problems, which plague humans and the customary solutions to those problems.

The eye is essentially an opaque eyeball filled with a water-like fluid. In the front of the eyeball is a transparent opening known as the cornea. The cornea has the dual purpose of protecting the eye and refracting light as it enters the eye. After light passes through the cornea, a portion of it passes through an opening known as the pupil. Like the aperture of a camera, the size of the pupil opening can be adjusted by the dilation of the iris.

Light which passes through the pupil opening, will enter the crystalline lens. The crystalline lens is made of a fibrous, jelly-like material which has an index of refraction of 1.44. Unlike the lens on a camera, the lens of the eye is able to change its shape and thus serves to fine-tune the vision process. The lens is attached to the ciliary muscles. These muscles relax and contract in order to change the shape of the lens. By carefully adjusting the lenses shape, the ciliary muscles assist the eye in the critical task of producing an image on the back of the eyeball.

The inner surface of the eye is known as the retina. The retina contains the rods and cones which serve the task of detecting the intensity and the frequency of the incoming light. An adult eye is typically equipped with 120 million rods which detect the intensity of light and 6 million cones which detect the frequency of light. These rods and cones send nerve impulses to the brain. The nerve impulses travel through a network of nerve cells; there are as many as one-million neural pathways from the rods and cones to the brain. This network of nerve cells is bundled together to form the optic nerve on the very back of the eyeball.

Each part of the eye plays a distinct part in enabling humans to see. The ultimate goal of such an anatomy is to allow humans to focus images on the back of the retina.

Common Defects in Vision in Eye:

If the eyeball is too short or the lens too flat or inflexible, the light rays entering the eye — particularly those from nearby objects — will not be brought to a focus by the time they strike the retina. Eyeglasses with convex lenses can correct the problem. Farsightedness is called hypermetropia.

If the eyeball is too long or the lens too spherical, the image of distant objects is brought to a focus in front of the retina and is out of focus again before the light strikes the retina. Nearby objects can be seen more easily. Eyeglasses with concave lenses correct this problem by diverging the light rays before they enter the eye. Nearsightedness is called myopia.

These muscles relax and contract in order to change the shape of the lens. By carefully adjusting the lenses shape, the ciliary muscles assist the eye in the critical task of producing an image on the back of the eyeball.