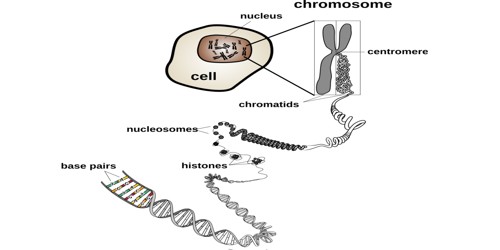 The chromosomes of a cell are in the cell nucleus. They carry genetic information. In the nucleus of each cell, the DNA molecule is packaged into thread-like structures called chromosomes. They are made up of DNA and protein combined as chromatin. Each chromosome contains many genes. It is the microscopic threadlike part of the cell that carries hereditary information in the form of genes. They come in pairs: one set from the mother; the other set from the father. It helps ensure that DNA is replicated and distributed appropriately during cell division.

The structure and location of chromosomes are among the chief differences between viruses, prokaryotes, and eukaryotes. They are present in every cell nucleus with very few and special exceptions. This means they are found in all eukaryotes since only eukaryotes have cell nuclei. When eukaryote cells divide, they also divide. Humans have 23 pairs of chromosomes.

They are the physical carriers of genes, consisting of DNA and associated proteins. When a somatic (body) cell (such as a muscle cell) divides, the process is called mitosis. Before mitosis, the cell copies all the chromosomes and then it can divide. When they duplicate, they look like the letter “X”. When they are doubled, the two halves are called chromatids. The chromatids are joined at the centromere. 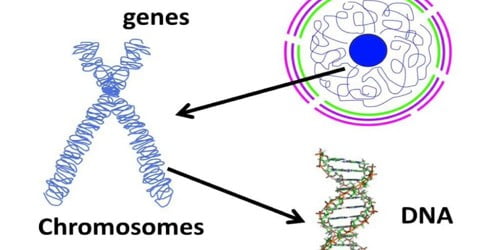 A chromosome is a single chain of DNA that is coiled and supercoiled to form dense thread-like pieces. There are 46 chromosomes in a human, 23 pairs. Everyone has a set of chromosomes from their father and a matching set from their mother. They include a pair of sex chromosomes. The mother’s eggs always contain an X chromosome, while the father’s sperm contains either a Y chromosome or an X chromosome. That determines the sex of the child. To produce sex cells (gametes), the stem cells go through a different division process called meiosis. This reduces the 23 pairs (diploid) to 23 singles (haploid). These, when combined by fertilization, produce a new set of 23 pairs.

Different animals have different numbers of chromosomes. If a person does not have the usual number of chromosomes, they may die or have one or more peculiarities. They are bundles of tightly coiled DNA located within the nucleus of almost every cell in our body. For example, they might get a genetic disorder like Down syndrome (extra chromosome 21) and Klinefelter syndrome (a male with two X chromosomes). Some genetic disorders are more common than others.