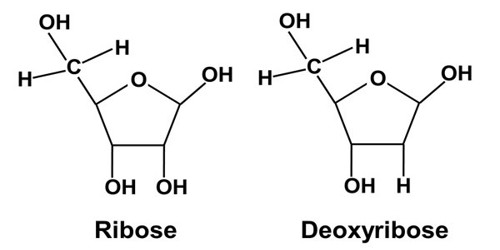 Deoxyribose is the sugar component of deoxyribonucleic acid or DNA, having one less hydroxyl group than ribose, the sugar component of ribonucleic acid or RNA. Together, long strings of DNA containing many individual molecules of deoxyribose carry the genetic information of an animal. It is a sugar derived from ribose by replacement of a hydroxyl group by hydrogen. The carbons in the sugars are given the little dashes so that they can be distinguished from any numbers given to atoms in the other rings. Deoxyribose, as the name might suggest, is ribose which has lost an oxygen atom – “de-oxy”.  Any molecule that ends in ‘ose’ is considered a sugar. The chemical formula for deoxyribose is C5 H10 O4. 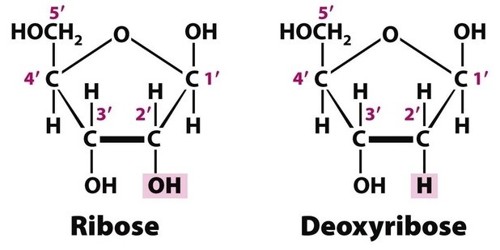 Deoxyribose, found in DNA, is a modified sugar, lacking one oxygen atom. DNA or deoxyribonucleic acid is a polymer formed of many nucleic acids. Each nucleic acid is composed of a deoxyribose molecule bound to both a phosphate group and either a purine or a pyrimidine. The only difference between RNA and DNA is the presence of deoxyribose instead of ribose. This difference of one oxygen atom is important for the enzymes that recognize DNA and RNA, because it allows these two molecules to be easily distinguished inside organisms. Another name for the deoxyribose is deoxyribofuranose, which is derived from the fact that it is a five-membered ring with four carbon atoms and one oxygen atom.