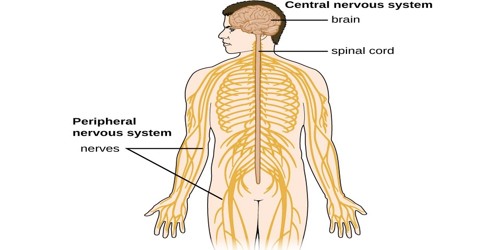 The nervous system is a system in the body that sends signals around the body. It is essentially the body’s electrical wiring. It lets people and animals respond to what is around them. The central nervous system is the brain, the spinal cord, and nerves. This system transmits signals between the brain and the rest of the body, including internal organs. It is present in most animals. It is there to coordinate movement, to process the input of the senses, and to make the animals act a certain way. It is made up of neurons and cells called glia, among other things. Glial cells keep the neurons safe and healthy. For example, glia helps support and hold neurons in place, protect neurons, repair neurons and help restore neuron function, regulate neurotransmitters, etc.

The structure of the system includes the brain and spinal cord, which together are called the central nervous system. The basic unit of the nervous system is a nerve cell or neuron. The human brain contains about 100 billion neurons. The brain has billions of nerve cells to help think, walk, and breathe. The nervous system can react in 1/100 of a second to a stimulus, like a pain signal.