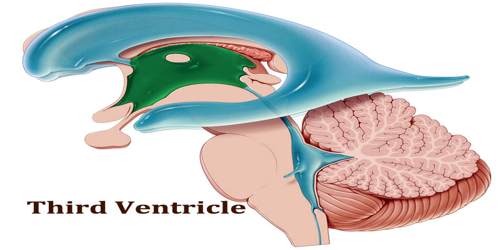 Third ventricle is a median (midline) cavity in the brain and is bounded by the thalamus and hypothalamus on either side. It communicates anteriorly (in front) with the lateral ventricles, and posteriorly (in back) with the aqueduct of the midbrain, also known as the aqueduct of Sylvius. All the ventricles are filled with cerebrospinal fluid, which is formed by choroid plexuses, structures that are located in the walls and roofs of the ventricles. Structure and Functions of Third Ventricle There are two protrusions on the anterior aspect of the third ventricle:

The third ventricle is involved in several functions of the body including: