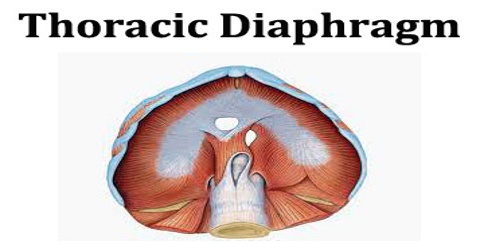 The origins of the diaphragm are found along the lumbar vertebrae of the spine and the inferior border of the ribs and sternum. Openings in the diaphragm allow the esophagus, phrenic and vagus nerves, descending aorta, and inferior vena cava to pass between the thoracic and abdominal cavities. The lungs are enclosed in the thoracic cavity by the rib cage on the front, back, and sides with the diaphragm forming the floor of the cavity.

Structure and Functions of Thoracic Diaphragm

Serving as the inferior aspect of the thorax, it is the means by which the chest cavity volume is increased. In order to expand the thorax, increase the vertical dimension of the chest, and decrease the air pressure in the thoracic cavity, this sheet of muscle has to flatten out by contracting. Diaphragm sometimes contracts involuntarily due to certain irritations; these contractions can happen because we eat too quickly, drink carbonated beverages, experience some acid indigestion, or are dealing with a stressful day. If air is inhaled at these times of contraction, the space between the vocal cords at the back of the throat closes suddenly; producing the noise we call hiccups. Short-lived hiccuping episodes are very common. Longer-term hiccups (lasting for days) can occur as well and are usually caused by irritated nerves, though medical attention would be needed in order to rule out other health concerns.

Diaphragm functions in breathing. During inhalation, the diaphragm contracts and moves in the inferior direction, thus enlarging the volume of the thoracic cavity. This reduces intra-thoracic pressure: In other words, enlarging the cavity creates suction that draws air into the lungs. It is also involved in non-respiratory functions, helping to expel vomit, feces, and urine from the body by increasing intra-abdominal pressure, aiding in childbirth, and preventing acid reflux by exerting pressure on the esophagus as it passes through the esophageal hiatus.