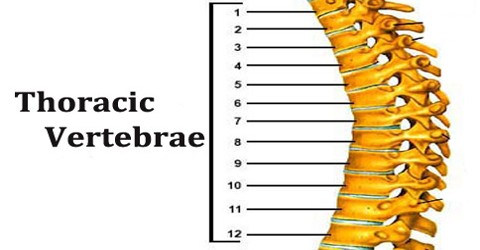 Structure and Functions of Thoracic Vertebrae The vertebrae are separated by intervertebral discs of fibrocartilage, which are flexible cartilage discs located between the bodies of two adjacent vertebrae that allow movement in the spine and have a shock absorbing or cushioning function as well. In total, the adult human body typically has 23 discs, with the first found between cervical vertebrae 2 and 3, and the last one is found between the lumbar vertebra and the sacrum.

Posterior to the vertebral bodies are thin bony rings known as the vertebral arches. Each vertebral arch surrounds and protects a hollow vertebral foramen that provides space for the spinal cord and spinal nerves. A pair of transverse processes extends from the lateral sides of each vertebral arch to support the ribs and provide attachment sites for the rotatores and multifidus muscles of the back.