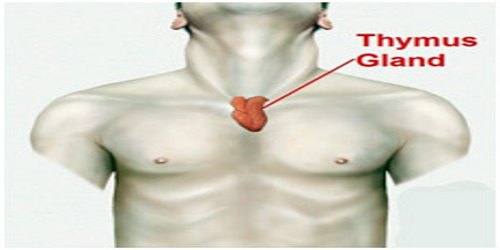 Thymus gland is an organ of the lymphatic system located behind the upper sternum (breastbone). T cells (T lymphocytes) develop and mature in the thymus before entering the circulation. T lymphocytes or T-cells are white blood cells that protect against foreign organisms (bacteria and viruses) that have managed to infect body cells. They also protect the body from itself by controlling cancerous cells. From infancy to adolescence, the thymus is relatively large in size. After puberty, the thymus begins to decrease in size and continues to shrink with age. In humans, the thymus stops growing in early childhood and gradually shrinks in size through adulthood, resulting in a gradual decline in immune system function. The thymus provides an inductive environment for development of T cells from hematopoietic progenitor cells. In addition, thymic stromal cells allow for the selection of a functional and self-tolerant T cell repertoire. Therefore, one of the most important roles of the thymus is the induction of central tolerance.

The two main components of the thymus, the lymphoid thymocytes and the thymic epithelial cells, have distinct developmental origins. The thymic epithelium is the first to develop, and appears in the form of two flask-shape endodermal diverticula, which arise, one on either side, from the third pharyngeal pouch, and extend lateralward and backward into the surrounding mesoderm and neural crest-derived mesenchyme in front of the ventral aorta.

Structure and Functions of Thymus Gland

Thymus gland is a soft, roughly triangular organ located in the mediastinum of the thoracic cavity anterior and superior to the heart and posterior to the sternum. It has two distinct but identical lobes that are each surrounded by a tough, fibrous capsule.

The thymus has a thin outer covering called a capsule and consists of three types of cells. Thymic cell types include epithelial cells, lymphocytes, and Kulchitsky cells, or neuroendocrine cells. Each lobe of the thymus contains many smaller divisions called lobules. A lobule consists of an inner area called the medulla and an outer region called the cortex. Epithelial tissues and lymphatic tissues containing dendritic cells and macrophages make up the majority of both regions of the thymus.

In the center of the thymus (the medulla) T-cells complete their process of maturing and are then released into the bloodstream. The arteries supplying the thymus are derived from the internal thoracic artery, and from the superior thyroid artery and inferior thyroids. The veins end in the left brachiocephalic vein (innominate vein), and in the thyroid veins. The nerves are exceedingly minute; they are derived from the vagus nerve and the sympathetic nervous system. Branches from the hypoglossal and phrenic nerves reach the investing capsule, but do not penetrate into the substance of the organ.

The function of the thymus is to receive immature T cells that are produced in the red bone marrow and train them into functional, mature T cells that attack only foreign cells. T cells first reside within the cortex of the thymus where they come in contact with epithelial cells presenting various antigens. The immature T cells that respond to the antigens corresponding to foreign cells are selected to survive, mature, and migrate to the medulla while the rest die via apoptosis and are cleaned up by macrophages. This process is known as positive selection. The stock of T-lymphocytes is built up in early life, so the function of the thymus is diminished in adults. It is largely degenerated in elderly adults and is barely identifiable, consisting mostly of fatty tissue. Involution of the thymus has been linked to loss of immune function in the elderly, susceptibility to infection and to cancer. T lymphocytes differentiate into three major classes in the thymus. These classes are: