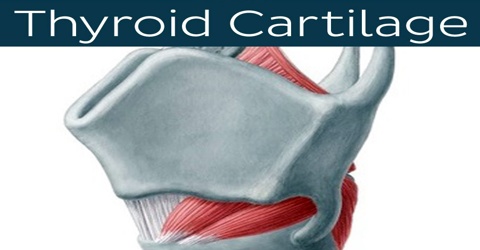 It is formed of two approximately quadrilateral plates (called laminae) that are joined anteriorly (in the front) at an angle of from 90° to 120° to create a prominence in the neck. This bump is called the laryngeal prominence (or, familiarly, Adam’s apple). The thyroid cartilage has nothing to do with the thyroid gland, except for proximity.

The English term thyroid cartilage is derived from the Latin expression cartilago thyreoides. The latter is a translation of Ancient Greek χόνδρος θυρεοειδής, attested in the writings of the Greek physician Galen. The Latin word cartilago, as well as the Ancient Greek word χόνδρος, both mean cartilage, while the ancient Greek word θυρεοειδής means shield-like or shield-shaped. The latter compound is composed of Ancient Greek θυρεός, shield and εἶδος, form/shape. The Greeks used εἶδος in compounds to indicate a resemblance with the first part of the word.

Structure and Functions of Thyroid Cartilage

Thyroid cartilage is composed of two plates, called laminae, that join in the front at an angle of 90 to 120 degrees. The protrusion it creates, visible on the front of the neck, is generally more prominent in men because of a sharper angle in males. It is typically grows larger during the teenage years, especially in boys, and is seen as a secondary sexual characteristic. Secondary sexual characteristics are indicators of a person’s sex, which develop as they age (usually around puberty). Others include facial hair in men and breasts in women. The two halves of the cartilage that make out the outer surfaces extend obliquely to cover the sides of the trachea. The posterior edge of each half articulates with the cricoid cartilage inferiorly at a joint called the cricothyroid joint. The most posterior part of the cartilage also has two projections upwards and downwards. The upper projection is called the superior horn (cornu), and the lower is called the inferior horn. The superior horn is long and narrow, backward, and medialward, and ends in a conical extremity, which gives attachment to the lateral thyrohyoid ligament. The inferior horn is short and thick; it is directed downward, with a slight inclination forward and medialward, and presents, on the medial side of its tip, a small oval articular facet for articulation with the side of the cricoid cartilage.

Thyroid cartilage forms the bulk of the front wall of the larynx. It protects the vocal folds (“vocal cords”), which are located directly behind it.