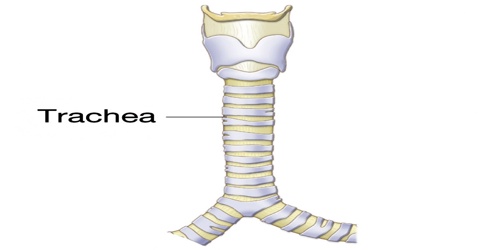 Trachea is the tube in vertebrate animals that leads from the larynx to the bronchial tubes and carries air to the lungs. In mammals the trachea is strengthened by rings of cartilage. It is also called windpipe. This tube is approximately 3.9 to 6.3 inches long and its inner diameter is around 0.83 to 1.1 inches. The trachea begins at the larynx and ends at the level of the fourth or fifth thoracic vertebra. At the distal end the trachea bifurcates into the primary bronchi. The trachea extends from the larynx and branches into the two primary bronchi. At the top of the trachea the cricoid cartilage attaches it to the larynx. This is the only complete ring, the others being incomplete rings of reinforcing cartilage. The ends of the rings are connected by the trachealis muscle. This muscle contracts during coughing and this reduces the lumen of the trachea.

An inflammatory condition, also involving the larynx and bronchi, called croup can result in a barking cough. A tracheotomy is often performed for ventilation in surgical operations where needed. Intubation is also carried out for the same reason by the inserting of a tube into the trachea.

Structure and Functions of Trachea

Trachea contains numerous rings of hyaline cartilage which are C-shaped, being dorsally incomplete, connected to each other by elastic connective tissue. In man the trachea is about 15 centimetres (6 inches) long and 2 to 3 centimetres in diameter. The ends of the incomplete rings are joined by the smooth trachealis muscle. The structural conformation of the trachea prevents collapse due to traction forces, whilst allowing it to adjust in length and diameter, as the neck moves and the diaphragm contracts. The trachea’s walls are made up of a number of layers including the inner mucosa, fibrocartilaginous middle layer, and adventitia in the neck or serosa (in the thorax). The inner mucosa contains glands which produce mucus. This mucus traps debris and is constantly moved upwards towards the oropharynx where it is swallowed. This mechanism is known as the Muco-Ciliary escalator. Trachea is composed of about 20 rings of tough cartilage. The back part of each ring is made of muscle and connective tissue. Moist, smooth tissue called mucosa lines the inside of the trachea. The trachea widens and lengthens slightly with each breath in, returning to its resting size with each breath out. The trachea is soft and floppy rather than rigid, usually due to a birth defect. In adults, tracheomalacia is generally caused by injury or by smoking. Tracheal obstruction is a tumor or other growth can compress and narrow the trachea, causing difficulty breathing. A stent or surgery is needed to open the trachea and improve breathing.

Treatments – A small hole is cut in the front of the trachea, through an incision in the neck. It is called “Tracheostomy”. It is usually done for people who need a long period of mechanical ventilation (breathing support). Surgery may be best for removing certain tumors obstructing the trachea. Surgery may also correct a tracheoesophageal fistula.

During bronchoscopy, a balloon can be inflated in the trachea, opening a narrowing (stenosis). Sequentially larger rings can also be used to gradually open the trachea. After dilation of a tracheal obstruction, a stent is often placed to keep the trachea open. Silicone or metal stents may be used.