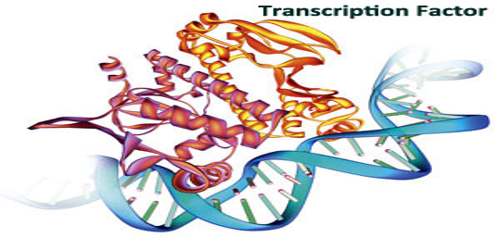 Transcription factors (TFs) are proteins that regulate the transcription of genes—that is, their copying into RNA, on the way to making a protein.  They are usually proteins, although they can also consist of short, non-coding RNA. TFs are also usually found working in groups or complexes, forming multiple interactions that allow for varying degrees of control over rates of transcription. Their function is to regulate – turn on and off – genes in order to make sure that they are expressed in the right cell at the right time and in the right amount throughout the life of the cell and the organism. Groups of TF’s function in a coordinated fashion to direct cell division, cell growth, and cell death throughout life; cell migration and organization (body plan) during embryonic development; and intermittently in response to signals from outside the cell, such as a hormone. There are up to 2600 TFs in the human genome.

Eukaryotes often have a promoter region upstream from the gene or enhancer regions up or downstream from the gene, with certain specific motifs that are recognized by the various types of TF. The TFs bind, attract other TFs and create a complex that eventually facilitates binding by RNA polymerase, thus beginning the process of transcription.

Mechanism and Functions of Transcription Factor Transcription factors use a variety of mechanisms for the regulation of gene expression. These mechanisms include: Manipulating Transcription factors (TFs) to reverse the cell differentiation process is the basis of methods for deriving stem cells from adult tissues. The ability to control gene expression, along with knowledge obtained from studying the human genome and genomics in other organisms, has led to the theory that we can prolong our lives if we just control the genes that regulate the aging process in our cells.