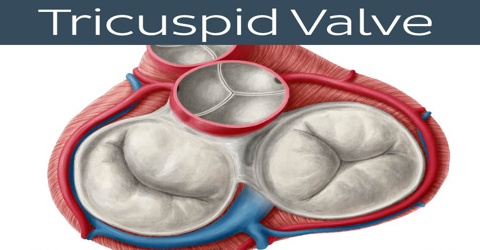 Tricuspid valve is a valve of the heart, usually having three cusps, that is located between the right atrium and right ventricle and it allows blood to flow only from the atrium into the ventricle. The tricuspid valve prevents the backflow of blood to the right atrium. It is one of the four heart valves, the first one that blood encounters as it enters the heart. The atrial and ventricular masses, conduction system tissue, and support structure of the fibroelastic cardiac skeleton allow coordinated actions of the tricuspid valve.

Structure and Functions of Tricuspid

Tricuspid valve is often called the “forgotten valve” or “lost valve,” because it is understudied relative to the other cardiac valves. It is located between the right atrium and right ventricle and has a valve area of 4-6 cm.  The valve is nearly vertical and is approximately 45° to the sagittal plane. The valve itself is slightly inclined to the vertical so that the margins of the valve are anterosuperior, inferior, and septal, and the cusps take their name from these attachment sites. The tricuspid valve is not the only cardiac valve that is “tricuspid” in nature. On the left side of the heart, the aortic valve also features three cusps. The tricuspid subvalvular apparatus consists of anterior, posterior, and septal papillary muscles and their true chordae tendineae. The anterior papillary muscle is the largest, the posterior is often bifid or trifid, and the septal is the smallest. These papillary muscles supply the chordae for the adjacent components of the cusps they support.

Tricuspid valve prevents back flow of blood from the right ventricle into the right atrium during ventricular systole when it closes and allows blood to flow from right atrium into right ventricle during ventricular diastole when it opens. This valve is weakened by drug abuse. The back flow of blood is also known as regression or tricuspid regurgitation.