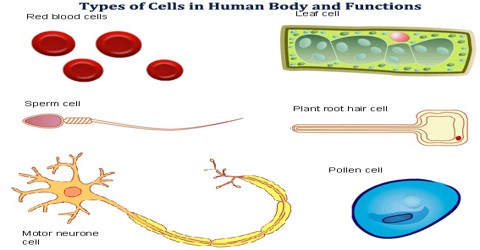 Types of Cells in Human Body and Functions

Types of Cells in Human Body and Functions

Human body has a number of cells and related tissues. Cells in the human body number in the trillions and come in all shapes and sizes. There are hundreds of different types of cells in the body and the structure of a cell is perfectly suited for the role it performs. Cells of the digestive system, for instance, are different in structure and function from cells of the skeletal system. No matter the differences, cells of the body depend on one another, either directly or indirectly, to keep the body functioning as one unit. If any tissue is damaged, it actually means the cells and cell structure in the organ is damaged. These damaged cells decides the fate of entire tissue i.e. either to recover or die.

Many cells have internal tendency to multiply and help in repair while few don’t have this property.

The following are examples of different types of cells in the body. From transporting oxygen throughout the body to fighting infection, cells of the blood are vital to life. The three major types of cells in the blood are red blood cells, white blood cells, and platelets. Red blood cells determine blood type and are also responsible for transporting oxygen to cells. White blood cells are immune system cells that destroy pathogens and provide immunity. Platelets help to clot blood and prevent excessive blood loss due to broken or damaged blood vessels. Fat cells, also called adipocytes, are the major cell component of adipose tissue. Adipocytes contain droplets of stored fat (triglycerides) that can be used for energy.

Sex cells or gametes are reproductive cells produced in male and female gonads. Male sex cells or sperm are motile and have a long, tail-like projection called a flagellum. Female sex cells or ova are non-motile and relatively large in comparison to the male gamete. Nerve cells or neurons are the basic unit of the nervous system. Nerves send signals among the brain, spinal cord, and other body organs via nerve impulses. A neuron consists of two major parts: a cell body and nerve processes.

Cancer results from the development of abnormal properties in normal cells that enable them to divide uncontrollably and spread to other locations. Cancer cell development can be caused by mutations that occur from factors such as chemicals, radiation, ultraviolet light, chromosome replication errors, or viral infection. They are the toughest body cell systems and are bound together by calcium and phosphate. As you know they give strength, support and frame-work to the body by enclosing organs in skeletal system i.e bones.

Also called as myocytes and are present in muscle tissue. They are rich in proteins actin and myosin, mostly long, large and have ability to contract and relax providing movements. They are of three types as skeletal, cardiac and smooth muscle cells.

These are the cells which are present as support to adjacent cells. Ex: Glial cells in the brain and spinal cord help provide nourishment to the nerve cells and also protect them from shocks and trauma.

Besides, there are cells which form covering tissue. These can be of different shapes, will ability to constrict, dilate, secrete and even absorb. Such cells are seen in the lining of intestine, stomach, lungs, nephrons etc. The examples include goblet cells, paneth cells etc.