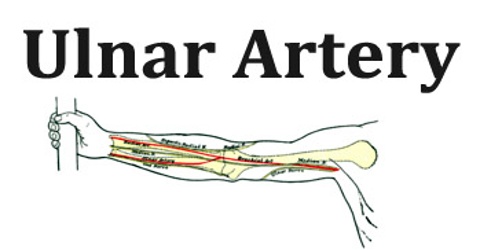 Ulnar artery is a large artery branching from the brachial artery, supplying muscles in the forearm, wrist, and hand. Arising near the elbow, it passes obliquely in a distal direction to become the superficial palmar arch. It has nine branches: four in the forearm, two in the wrist, and three in the hand. Palmar Carpal Branch: A small branch, it traverses the distal ulna beneath the flexor digitorum profundus tendons. Its anastamosis contributes to the palmar carpal arch.

Other branches of the ulnar arteries include the posterior and anterior ulnar recurrent arteries. Both are located near the elbow. Structure and Functions of Ulner Artery Some of the branches supply blood to the area around the elbow-joint, while others supply the flexor and extensor muscles in the lower arm. At the wrist, branches of the ulnar and radial arteries join to form a network of vessels, which supply the structures in the wrist, hand and fingers. The corresponding ulnar vein will parallel the brachial artery on its way back to the heart.