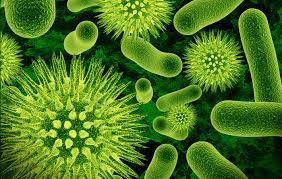 Virus – A virus is a capsule of protein that contains genetic material. A virus cannot reproduce on its own; it must infect a living cell to grow.

Bacteria – Bacteria are one-celled organisms that live on their own. They can multiply and reproduce by subdivision

Bacteria and viruses cause many of the diseases we’re familiar with and may sound synonymous; they are greatly different from each other.

For one thing, they differ greatly in size. The biggest viruses are only as large as the tiniest bacteria. Viruses are microscopic; they range in size from about 20 to 400 nanometers in diameter (1 nanometer = 10-9 meters). By contrast, the smallest bacteria are about 400 nanometres in size.

Another difference is their structure. Bacteria are complex compared to viruses. A typical bacterium has a rigid cell wall and a thin, rubbery cell membrane surrounding the fluid, or cytoplasm inside the cell. A bacterium contains all of the genetic information needed to make copies of itself—its DNA—in a structure called a chromosome. In addition, it may have extra loose bits of DNA called plasmids floating in the cytoplasm. Bacteria also have ribosomes, tools necessary for copying DNA so bacteria can reproduce. Some have threadlike structures called flagella that they use to move.

A virus may or may not have an outermost spiky layer called the envelope. All viruses have a protein coat and a core of genetic material, either DNA or RNA. And that’s it.

The main difference between viruses and bacteria is the way they reproduce. Bacteria, given the proper nutrients, can grow and reproduce on their own, but… Viruses cannot “live” or reproduce without getting inside some living cell, whether it’s a plant, animal, or bacteria.

Bacteria contain the genetic blueprint (DNA) and all the tools (ribosomes, proteins, etc.) they need to reproduce themselves.

Viruses are moochers. They contain only a limited genetic blueprint and they don’t have the necessary building tools. They have to invade other cells and hijack their cellular machinery to reproduce. Viruses invade by attaching to a cell and injecting their genes or by being swallowed up by the cell. Here’s an example of viral infection.

Some diseases caused by virus and bacteria:

How bacteria and viruses enter the body
To cause disease bacteria have to gain access to the body. The ways in which a  bacteria can get access to an animal body are:

Viruses are spread from one person to another by:

The body reacts to pathogenic bacteria by increasing local blood flow (inflammation) and sending in cells from the immune system to attack and destroy the bacteria. Antibodies produced by the immune system attach to the bacteria and help in their destruction. Serious infections can be treated with antibiotics, which work by disrupting the bacterium’s metabolic processes

The body’s response to viral infection

Viruses pose a considerable challenge to the body’s immune system because they hide inside cells. This makes it difficult for antibodies to reach them. However, special immune system cells, called T-lymphocytes, can recognize and kill cells containing viruses. Many viruses, when released from infected cells, will be effectively knocked out by antibodies, produced in response to infection or previous immunization.

Antibiotics are useless against viral infections. Antiviral drugs are available only for few viral diseases, such as influenza, herpes, hepatitis B and C and HIV, but research is ongoing.

However, immunization is helpful in fighting viral infection. The large scale immunization has led to the eradication of small pox once one of the most feared viral disease.

How to Know When You Need Antibiotics

Don’t expect antibiotics to cure every illness. Antibiotics are only effective against bacterial infections. In the past antibiotics were prescribed “just in case” the infection was bacterial rather than viral because it was thought that taking them “couldn’t do any harm”. Wrong. This very practice has contributed to the development of antibiotic resistant strains of bacteria.

While the use of antibiotics depends on the specific diagnosis, basic guidelines include:

Colds and flu are caused by viruses. They can’t’ be cured with antibiotics. Symptoms can last two weeks or more and should be allowed to run their course.

Diarrhea can be caused by a variety of bacteria, viruses, and parasites. Children can also have diarrhea without having an infection, such as when diarrhea is caused by food allergies or as a result of taking medications (such as antibiotics). A child is considered to have diarrhea when the child’s bowel movements are both more frequent than usual and looser and more watery than usual.

Children with diarrhea may have additional symptoms including nausea, vomiting, stomach aches, headache, or fever.

Swine flu is an infection caused by a virus. It’s named for a virus that pigs can get. People do not normally get swine flu, but human infections can and do happen. The virus is contagious and can spread from human to human. Symptoms of swine flu in people are similar to the symptoms of regular human flu and include fever, sore throat, muscle pains, severe headache, coughing, chills, weakness and general discomfort. Figure: Electron microscope image of the reassorted H1N1 influenza virus photographed at the CDC Influenza Laboratory. The viruses are 80–120 nanometres in diameter.

There are antiviral medicines you can take to prevent or treat swine flu. There is no vaccine available right now to protect against swine flu. You can help prevent the spread of germs that cause respiratory illnesses like influenza by

Prevention of food to contaminate

Here are four major tips recommended by the Centers for Disease Control and Prevention (CDC) to prevent contaminating food.