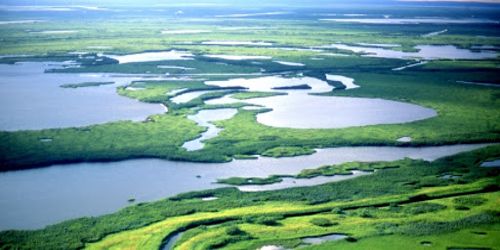 A wetland is a place where the land is covered by water, either salt, fresh, or somewhere in between. Wetlands are areas of marsh or peatland with water that is static or flowing. They are ecosystems whose formation and characteristics are determined by water. They are areas where water covers the soil or is present either at or near the surface of the soil all year or for varying periods of time during the year, including during the growing season. The major types of wetlands in Asia are mangroves, freshwater swamp forests, peat swamp forests, lakes, and river systems. They include mangroves, peatlands and marshes, rivers and lakes, deltas, floodplains, and flooded forests, rice-fields, and even coral reefs.

Wetlands vary widely because of regional and local differences in soils, topography, climate, hydrology, water chemistry, vegetation, and other factors, including human disturbance. Until recently, people thought that wetlands were soggy, useless land that would only be valuable if they were drained and developed for agriculture, housing, or infrastructure projects. Besides the direct physical destruction, wetlands are also threatened by chemical contamination and other pollutants.

Wetlands occur where water meets land. They occur where the water table is at or near the surface of the land, or where the land is covered by water. These prevent flooding by holding water like a large sponge. Water moves slowly and this prevents flooding. Wetlands store water during storms when water levels are high. Then, when water levels are low, wetlands release water. They exist in every country and in every climatic zone, from the polar regions to the tropics, and from high altitudes to dry regions. Wetland plants have roots planted firmly in the muddy bottom, but with stalks that rise high above the water surface. This can slow down the flow of water. By doing this, they counter the water’s erosive forces.

Wetlands clean the water by filtering out the sedimentation. Because of this, wetlands have been referred to as the ‘kidneys’ of the ecosystem. Different plant communities may be found in different types of wetlands, with each species adapted to the local hydrology. Even harmful chemicals are converted into useable forms in this cleansing process. Many governments are now converting lands into artificial wetlands to filter out pollution.

Wetlands are the habitats for a very large variety of plant and animal life. Wetlands provide breeding, nesting, and feeding grounds for many endangered species. Even animals that live in other habitats use wetlands for migration and reproduction. The plant diversity of wetlands provide a breeding site for crabs, prawns, and fish.

The many diverse products of wetlands generate numerous socio-economic benefits that are important for the livelihood of local communities. Wetland plants are often referred to as hydrophytes because they are specially adapted to grow in saturated soils. Among the many products that are obtained from the wetlands is the water supply for domestic use, fisheries, forage resources, craft materials, and medicinal plants.

Wetlands are also treasured for their aesthetic value. They are wonderful places to visit. Many birds, insects, and other wildlife species are completely dependent on wetlands for critical stages in their life cycles, while many other species make use of wetlands for feeding, resting, or other life activities. Their intrinsic natural beauty makes them the favorite haunt of tourists, where opportunities for activities like boating, fishing, and bird-watching exist.

A wetland is an area of land that is either covered with water or saturated with water. The many benefits of wetlands are reason enough for conserving them. Reclamation of wetlands for development robs many types of flora and fauna of their habitats and ultimately leads to their extinction. Seawater can also create wetlands, especially in coastal areas that experience strong tides. Conservation efforts must, therefore, be taken before our natural wealth is lost through the selfish pursuits of man.