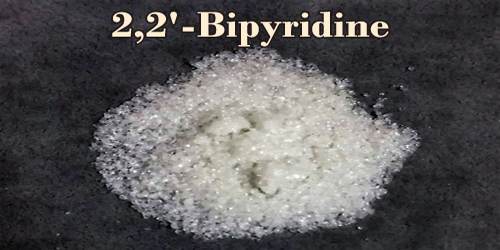 2,2′-Bipyridine is a bipyridine in which a bond between positions C-2 and C-2 ‘binds the two pyridine moieties. Bipyridines are a class of chemical compounds containing the formula (C5H4N)2, consisting of two pyridyl (C5H4N) rings, also known as bipyridyls, dipyridyls, and dipyridines. A significant isomer of the bipyridine family is this colorless solid. For many transition metals, it is a bidentate chelating ligand, forming complexes. Bipy ruthenium and platinum complexes display extreme luminescence, which can be implemented in practical terms.

Ball and stick model of the 2,2′-Bipyridine

As a ligand, 2,2′-Bipyridine has a role. It is prepared by using Raney nickel to dehydrogenate pyridine:

While uncoordinated bipyridine is often drawn in cis conformation with its nitrogen atoms, the lowest energy conformation both in solid-state and in solution is actually coplanar, with trans positioned nitrogen atoms. A cis conformation is adopted by Protonated bipyridine. Poison by ingestion, intraperitoneal, and subcutaneous pathways. Experimental evidence on teratogenes. Questionable carcinogen with tumorigenic experimental results. Recorded data on mutations. It emits poisonous NOx gases as it is heated for decomposition.

2,2′-Bipyridyl crystallizes from hexane, or EtOH, or from pet ether (after treatment with charcoal with a CHCl3 solution). Upon complexation, there is no enthalpic and entropic penalty for the related N, N-heterocyclic ligand phenanthroline, and therefore its complexes appear to be more stable. Phenanthroline and bipy are of equivalent fundamentality with respective pKa’s of 4.86 and 4.3 for their conjugate acids. It also precipitates through the addition of H2O from a condensed solution in EtOH.

Many substituted variants of bipy have been identified, indicating the popularity of this ligand design. Dry it with P2O5 in a vacuum. It can be further filtered by Al2O3 chromatography or by sublimation. In the visible portion of the spectrum, bipyridine complexes absorb strongly. Metal-to-ligand charge transfer (MLCT) is due to electronic transitions. Reagents are substances used, especially for research, to detect or determine another substance by chemical or microscopic means. Precipitants, solvents, oxidizers, reducers, fluxes, and colorimetric reagents are all types of reagents.